There was lots of snow this winter. I had the camera with me, but never got around to cut the footage. Until now, that is.

The beast from the east has said goodbye. Spring made its first advances now also in the higher areas of the mountains. In fact, a post on winter cycling is in the making. Skiing continues to be possible, but cross-country skiing tracks in the valleys start to deteriorate in quality. It’s actually two weeks already that I’ve been on the ski. My bikes got a service at the repair shop. They are now back with me. Time to wrap up the white season. It’s now all about getting ready for this year’s Transalp.

But I think I never got around to write up the days that my Mum visited and we went on the Marcialonga track between Campitello di Fassa and Pozza di Fassa. There was a little much movement of sorts between then and now. Yes, I haven’t even mentioned that I moved. Anyways. I’ve made some nice shots with my GoPro, and it’s a pity if they were to be wasted. So, I’m going to open this post with a quick summary of that day. The format is the same that I used for my recent post on cross-country skiing in the Gsieser Valley and on the frozen Lago di Resia. Then, I proceed with a wrap of my cross-country skiing winter. 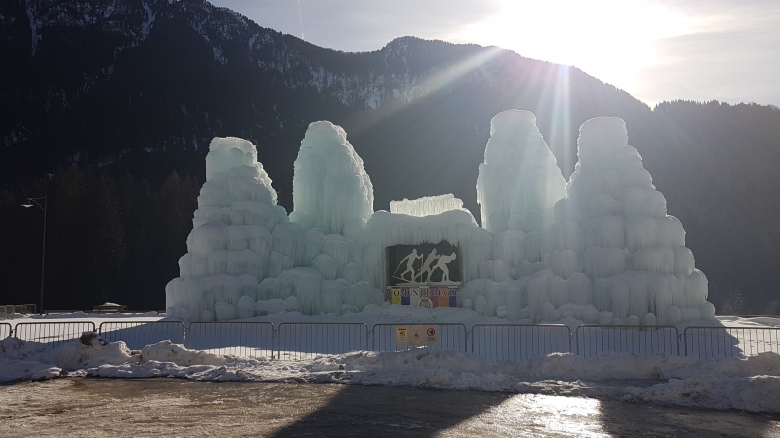 The Marcialonga is one of Italy’s most famous cross-country skiing marathons. Public Italian television broadcasts the event which attracts about 500-800 professionals, semi-professionals, and passionate amateurs. This year even went (somewhat) viral, as the slippery conditions caused a mass crash. I had already visited the final third of the Marcialonga. When my Mum visited Südtirol, we took the chance for one day on the upper third between Pozza di Fassa and Campitello di Fassa.

We rented at Gross Sport. There are many ski rentals in Pozza di Fassa and also in nearby Vigo di Fassa, but not all of them carry cross-country ski. Even though the Marcialonga is that famous, the Alpine slopes of the Dolomites are even more famous. Prices, like often in Südtirol, are amazing. My Mum didn’t want to believe that we only paid 12,- EUR per person for the day for shoes and ski.

We got a Fischer Sporty Crown with some traces of wear and tear. Overall, it was still in good condition. There is a difference between this and the XC Sport Crown that Fischer also sells. The latter is a slightly more advanced and lighter ski; the Sporty Crown is a set for beginners that want to experience a glimpse of sportive skiing. The Sporty Crown is still a ski that’s made for easy handling and superior grip, so don’t expect it to be a fast ski. It was for me due to the conditions: the tracks were super icy. Still, I’d prefer it over the Fischer Fibre Crown that I had in Nova Ponente.

Returning the ski took a wee bit long for us because we arrived when also masses of alpine skiers came back. In Südtirol, it’s common to store the ski at a depot at the ski rental rather than in the private accommodation. For ski rentals, this means more traffic – and more traffic could mean more incidental purchase. It’s a smart offer, but it increases waiting times. Alpine skiers wait half the day anyways (for lifts etc.) – it’s a different experience in cross-country skiing.

My Mum and I had been thinking whether to use Saturday or Sunday for our sportive day. We decided on Saturday because on Sunday we then could benefit from higher temperatures while doing a hike at higher altitude. We made a lucky decision. That Sunday was actually the day of the Marcialonga: the track would have been closed. Instead, we now shared the area with all those preparing for the race. At one point, we passed a group of Norwegians that was testing the best wax for their ski.

It was clear they’d have a super fast edition of the race. These were the most icy conditions I had for most of the winter. Those days, it had started to melt over day time, but night temperatures went down to freezing. Made it a bit more difficult up hill, but in the area between Pozza di Fassa and Campitello di Fassa, there is hardly much strong gradient. With some base speed, it was easy to get up the tiny bits of elevation. 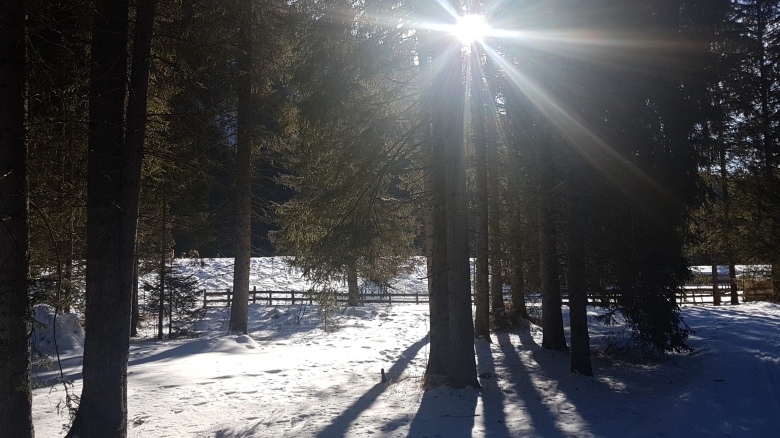 We went North first, towards the end of the valley. Before lunch time, we therefore were mostly in the shadow. The sun does not reach high enough over the mountains at the end of January. On the way back we then always had small support from going downhill again. You couldn’t see it. You didn’t really feel it uphill. It was still noticeable on the way down. Views were great in either direction; in this upper area of the Marcialonga, way and return run on different sides of the river. One side goes more over the fields in the center of the valley (the uphill on the Western side), while the other one adds a few hills and meanders through the forest.

There was easy access to the villages of Pozza di Fassa and Campitello di Fassa, but less so to villages in between. Hence, I would advise to take some snacks and definitely to take same drinks – or be ready to walk three to four minutes to reach a village core. There were also signs that indicated the kilometers of the Marcialonga – with some in-advance information on how that would translate into a local loop, they were helpful. But not everybody will possess that in-advance information.

Overall, I liked this upper part of the Marcialonga more than the lower part, if alone for the scenery and the separated ways for going up and coming back. There were some bridges connecting either side, which would allow for some variations on the long loop we did. My hesitation in excitement only stems from the delay in writing it up: meanwhile, I’ve also been to the Gsieser valley. Still, I’d happily return to Pozza di Fassa for some easy training loops.

Wrap: And so the season ends…

Over the course of two months, I’ve visited Nova Ponente (twice), the Marcialonga (the lower and upper part), Passo di Lavazé, the Sarentino valley (Sarntal), the Gsieser valley, the Lago di Resia, and the Alpe di Siusi. While the countryside was usually amazing, I was often not very impressed with the signage and the distance markers. Standing out positively in terms of enjoyment were Passo di Lavazé and the Gsieser Valley. For the panorama, you cannot not go to the Alpe di Siusi. Overall, I was surprised that even in the peak season in this very cross-country rich area, it felt like a niche sport. It was somewhat busy really only at Passo di Lavazé, on the allegedly easier parts of the Alpe di Siusi, and on the upper part of the Marcialonga.

I have not visited other very appealing options. I was simply running out of time and occasions; at some point, the legs also wanted to cycle. There is a new season to come. I did notice that it helped my overall fitness beyond just keeping the legs in shape.

My total expenditures on rental equipment were about 100,- EUR. I was not always happy with what I got. There is learning: I now have an idea where to go to. I’m not in it for speed records – KOMs in cross-country skiing are too far away for me. Hence, I personally can live with slower speed. Sure, I need to start from places that have a ski rental. The more interesting areas always have at least one. Prices are cheap. If I were to buy, I would invest in the area of 200-250,- EUR including shoes, binding, and poles. Add in additional cost of transporting the material, storing it over Summer, and maintaining it. For me, that’s 2-3 years of skiing – maybe even 3-4 years taking everything into account. It doesn’t seem worth the investment yet.