Skip to content
I totally enjoyed my time in the Gsieser Valley. The Reschensee was fun, too, but the material... oh boy.

In February, I explored to cross-country skiing areas that are a bit farther away from Bozen than the other ones that I had tested so far. One day, I went East in the area of Bruneck, or into the Gsieser Valley, to be more precise. Another day, I drove to the most Western part of Südtirol. Here, Italy meets Switzerland and Austria. At a height of 1,500m, I was skiing over a frozen lake. This is some advice for people who need to rent their equipment.

Gsieser Valley: the definition of fun and quality

The Gsieser Valley (Val Casies in Italian) belongs to the massive Dolomiti Nordic Ski carousel. It’s not a carousel in the traditional sense as you have it in alpine skiing. (As in: not all tracks are connected with tracks and/or lifts.) However, Dolomiti Nordic Ski defines an entire region of cross-country skiing, so that in a week of winter holidays (or two) you easily can avoid being on the same tracks twice. 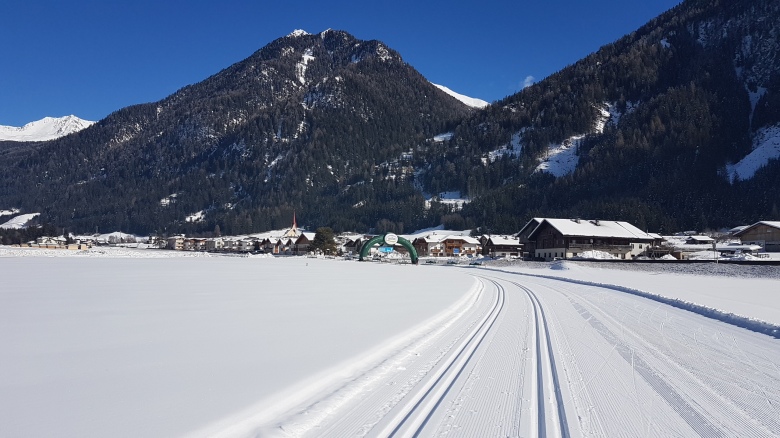 I rented my ski at the Intersport in Welsberg/Monguelfo. This might well be the best ski rental for cross-country skiing equipment that I’ve ever been to. And I only paid 12,- EUR for a day. Upon arrival, they asked me about my level of proficiency. They also asked me to fill out a short form indicating  said level and some body parameters (weight and height) which would help them to remember my optimal ski for the next time. I had been a bit undecided between classic and skating, but opted for classic. They offered me a Nordic Cruising ski. That’s a shorter version of a classic ski. (You probably knew that.) It’s easy to handle and can be used outside the track if necessary.

The ski itself was a Fischer Orbiter. According to some, that’s a ski that has even been used in cross-country skiing competitions – despite being a Nordic Cruising model. It’s main advantages from my perspective were a defined pressure point, which helped at uphills, and awesome control on descents. It’s a ski that retails at around 170,- EUR – way above the value of those ski that I had previously rented this winter. (Those had been below 100,- EUR.) Unsurprisingly, it was the fastest classic skiing experience of the season.

They combined it with poles that I could adjust in height, so that I could exploit the shorter length for whenever I might want to do some (albeit slow) skating. We settled on a pole length of 150cm for classic. I’m 172cm. And a half. Usually, I would go with 145cm long poles. The additional five centimeters made a massive difference in comfort. I will use it as my new standard for classic skiing.

The track in the Gsieser valley reaches a maximum of 42km. For that, you do as I did and start in Welsberg with a 2km/150m climb. Nothing majorly steep. It beautifully follows a river through a narrow valley. On the return, the same climb adds a fantastic speed final to a long day. 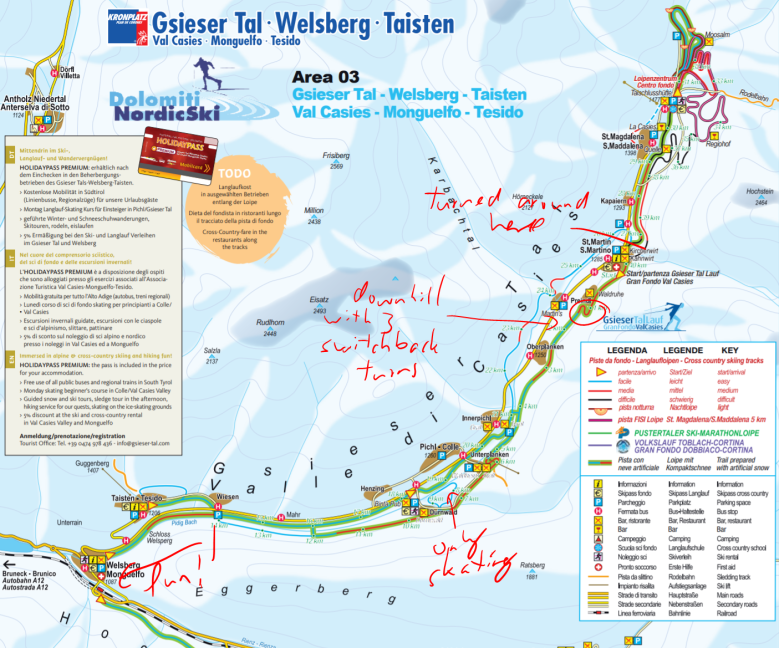 After that climb, things flatten out, certainly if you follow the advised direction and ski up on the Western side of the valley. As it’s a mountain valley, there is a gradual incline, but I had difficulties seeing and feeling it. Instead, I enjoyed an all-around white mountain panorama. The valley opens wide and catches a lot of sun due to its dominant North-South orientation. In fact, it was much warmer than I had expected; I was happy I had taken a thinner layer and also thinner gloves. 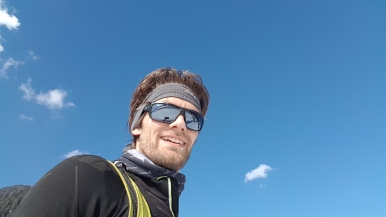 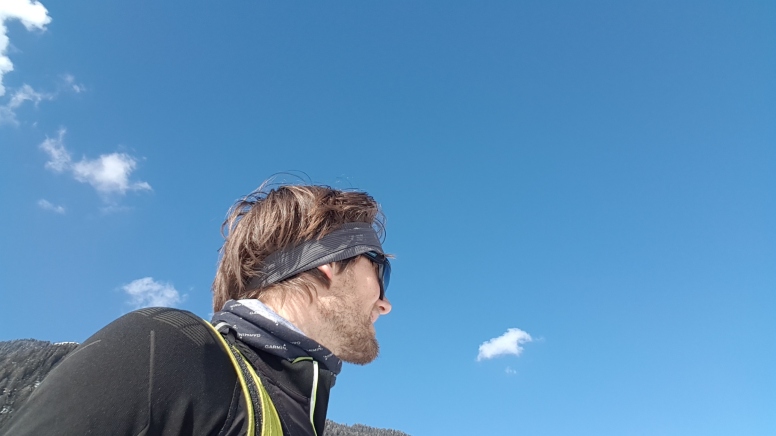 The informational value of the distance markers was great, as was the condition of the prepared surface. There was always at least one, but often there were two tracks for classic skiing. In between was a wide track for those skating. The Gsieser valley hosts a cross-country skiing marathon every February, and some commercial banners were already built up. I took a selfie with the one of my favorite milk producer. You need to try their “Heumilch” (hay milk) if you pass through Südtirol.

I turned around in St. Martin. The track would continue for another 6km (12 way/back) further up the valley, but as of St. Martin the steepness of the valley would increase. That day, I didn’t want to invest the extra 90min that I expected for that portion. One nice feature about the Gsieser Valley is that you can switch the side of the valley for the return way. For me, that meant a few more hills. Where there’s a hill, there’s also a downhill. One of them has three switchback turns, but the radius of the curves is wide enough to give ample control. Super big fun.

Go back. Absolutely. The Gsieser Valley was beautiful. There are lots of places where one could also stop for a break. The preparation was awesome and the material top notch. On the other side of Welsberg, more tracks would allow me further explorations. But go back right there. Tomorrow, if I could.

Lago di Resia/Reschensee: go and ski on ice, but rent and stay elsewhere

The Western end of Südtirol is less famous than the Dolomites maybe. It’s the home of the Stelvio, but it also hosts the second-lowest route to cross the Central Alps. On top of that pass, at 1,500m elevation, is now an artificial lake. For the construction of said lake, they moved a village a few hundred meters up the mountain. They didn’t demolish all of the existing village. To this date, visitors can see the church tower. And in winter, the lake freezes. The church tower becomes accessible again.

To put it short: this was the worst experience with material I have ever had. Yes, it was cheap. I paid 10,- EUR. (It’s usually 14,- EUR, but he gave me a discount because of the mess with the poles. See below.) But I only paid 12,- EUR in Welsberg. In Welsberg I got a premium model from Fischer. This time around, I got some model from a little known Italian brand: Slegar produces in the area of Monte Grappa. They were cheap, but they were okay. They didn’t have the best grip and they were rather difficult to control, but they could have been enough fun. I only would not expect miracles from them.

The poles instead were a disaster. He originally wanted to give me a 140cm long pole. I then asked for one of 150cm. He searched for three minutes and didn’t find anything. So I asked for 145cm at least. And he didn’t find it. Instead, he gave me another 140cm tall pole. That one was not particularly ergonomic. It’s total lack of lack indicated a rather ancient age.The loops for the hands included a knot that should not be there. They had fixed them apparently. Not replaced them. Hence, I could not use them. With big gloves, they were too small.

I had rented from Sport Winkler in Reschen/Resia. 150m up the road, there is another rental that made a better impression on me. I might just have picked the wrong on. They have good reviews online. I will certainly not return.

I took a small parking just North of Reschen. Opposite of that parking, there is a beginners slope for alpine skiing. At the foot of that slope, I entered the track. That spot is about 1km away from the border to Austria. I headed there first. This portion of the track is downhill, but it’s no major hurdle on the way back. The conditions were okay. The track was icy, but still in good shape. I lost the track in some fast turns with rather less profile. I still blame that on the ski rather than on the track. Other ski that I had this winter would have kept the track. Have I mentioned that the material was terrible? 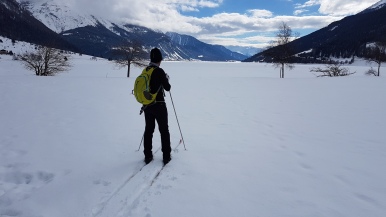 On the Austrian side, distance markers helped to understand progress. There were less distance markers on the Italian side. Anyways, on the Italian side the track didn’t exactly follow the layout that I had seen online. When I returned from Austria, I wanted to ski all the way down to the Church tower. About 1km before I reached it, the track ended. At that point, it already had basically just been on a pedestrian path for 2km, with very little preparation. The local cross-country map had looked different. Below I’ve indicated where the map shows a track that wasn’t actually there. There is no uninterrupted connection for skiers between Reschen and Graun.

In the end, I did just enter the lake. The ice was solid on these days. There were lots of people doing kite-surfing with skis. The problem at hand was the thick layer of soft snow. This would have been the ideal terrain for Nordic Cruising ski. Oh well. I didn’t try to set speed records anyways; eventually, I reached the church tower. 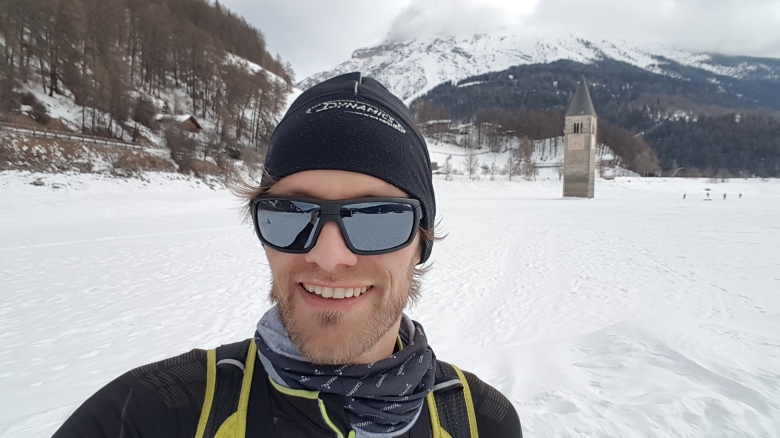 Take note: Wind often exposes skiers to the elements at Passo di Resia. As I went towards Austria, I definitely needed my thicker gloves. When I turned around, I got warm so quickly that I needed to switch to thinner gloves. At the opposite turning point, I had to switch again. The perceived temperature difference between either direction was somewhere between 5 and 10 degrees. For the kite-skiers, the wind was a bliss.

The church tower and the Austrian part of the track were worth a visit. I might return if it’s convenient, but I would very likely not rent from Sport Winkler again. While that certainly limited the enjoyment, the nature itself has its unique touch as compared to the rest of Südtirol. Oh, and it’s convenient if you think about a day to fuel up the car. It’s much cheaper in Austria.

Weekend is near. Time to go to high altitude again.
The Tremola San Gottardo might slow me down, but accelerates my love for riding the Alps.
I don't know if you can tell who is the mountainbiker-slash-splitboarder among us. @guido_anderwert knows all these mountains covered in snow. I took him in my world of tarmac for one day. @lars.waser showed that a Madone can very well ride through the Alps - if you have the legs. And I... I had ice cream. What else?
The Furka is my favorite Swiss climb. First time I went alone. Second time I road with a friend. Third time we were three. A couple times more and we ride it up all together? 🤔😜
One thousand kilometers since @anyuchenay took this photo. We pass too many places that I'd love sharing. Early on Sunday, I'm taking off for adding the next set.
When the rain caught me by surprise on top of the #sanetsch, for once I was happy that the descend wasn't a road. Without jacket and gloves, I'd have been freezing. Also, it makes for a unique road bike experience to go down by lift.
A week ago, I spent a happy weekend in Südtirol with @anyuchenay, @mathimuc, and his girlfriend. Gelato was included, and some long hours on the road were a welcome rest amidst some restless days. We'll be together again.
I often talk about how gelato stops are important elements of my Italian rides. It's only logical that I "joined" @q36_5 's Team Gelato. (i.e. purchased the jersey.)
One of the longest, one of the prettiest climbs in the Alps. An iconic bit on the Italian side of the Passo dello Spluga are the few very short switchbacks that are stacked on each other. Leads to lots of epic pictures that road cyclists dream of.
Follow Onabike.cc on WordPress.com