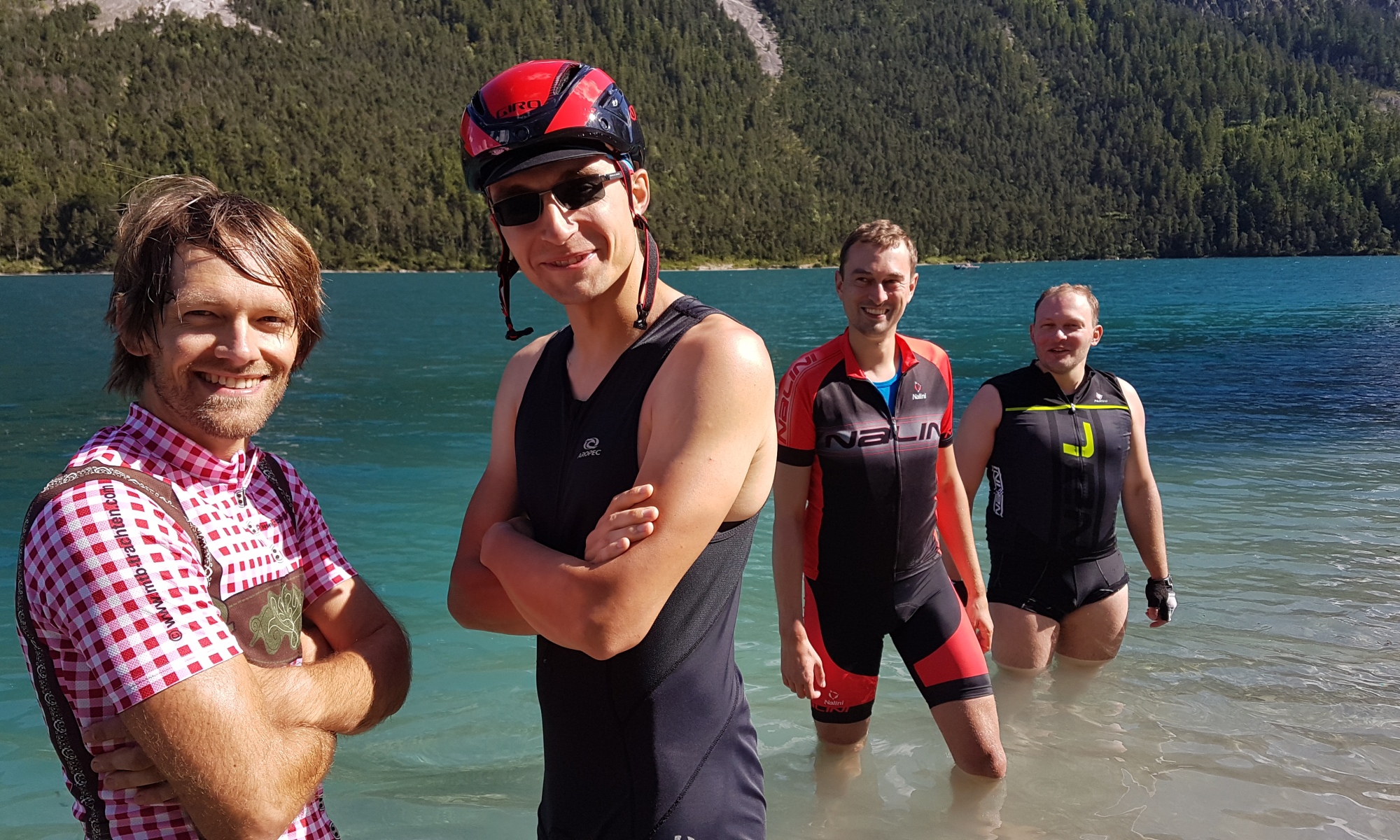 I cycled from Milan to the Bermudas. I mean... you can cycle straight through buildings and on water, can't you?

From Milan to Hamilton, Bermuda, it’s a distance of almost 6,500km. Veloviewer, which I use as a Strava add-on to log and analyze my training, provided me with a neat infograph. It defines the Bermudas as the point that I could have reached by bike.

At the end of a year, it all comes down to a few numbers. I’ve done my longest ride ever, and the ride with the largest accumulation of climbing. I have maxed my Eddington number (the largest number of activities that have covered a distance of no less than that number – it’s 57 activities with at least 57km), and I could have been on the Everest almost 8 times.

And the Bermudas. Never been there, but pictures look nice. I mean… you can cycle straight through buildings and on water, can’t you? Right. I wanted a more reasonable look at this and took it to Google Maps. Turns out that Almaty, Kazakhstan’s, would have been almost spot-on my destination. I have a friend who’s working there at the university. Could have been a surprise visit. Though Bermuda’s beaches are more attractive, to be honest.

These numbers don’t include Zwift, skiing, hiking, or anything which is not cycling outside. Including Zwift and everything, my total goes up to 8,500km. However, I wanted to be able to compare these numbers across seasons, and Zwift would have messed it up. I find it very satisfying to see that at any rate I had a pretty active season, and one that has given me fantastic memories.

Like that day that when I was eating bananas close to San Pellegrino, taking a break in breezing heat, then finding my spot to watch the Giro d’Italia pass by.

Or that day when I got my first well-earned KOM on Strava somewhere close to Milan. I also happily look back to all the new roads that I found around the city, drastically increasing the versatility of my day-to-day training. Not to mention even all the riding around the lakes.

That day that I got back up to speed and finally averaged again more than 30km/h on a single ride. And then did it again. It’s still a rare thing for me, but at least I’ve found it to be within my reach also in Milan.

Oh, and that day when I cycled up the Mottarone mountain from Stresa and broke into a new level of climbing performance. I never really had been in the top 50% on an uphill Strava segment, and now I was in the top 20% of a seriously challenging climb.

That day when I went down the Ponale street at Lago di Garda, which is something you would not normally do with a road bike. It was a fabulous experience. I might even do it again.

Absolutely those days when I crossed the Alps with my best friends from high-school who now are cycling friends for more than 15 years. This year, everything had worked out. We had great hotels, fantastic weather, and we followed a stunning route from Munich to Milan. Well, Como. I still enjoy watching our videos from this Transalp adventure, and we’re in full swing to plan for the next season. We might aim for Venice. Or Bergamo. Or something very different.

And certainly not least that day that I broke my personal long distance record. For five years, I had rarely exceeded 120km. This year, I took a long day in fall, a beautiful road around Lago Maggiore, and some salami, and just went all the way to 235km. I only had difficulties finding a good ice cream place for some on-the-way refreshment. It was a hot day, queues were long, and I didn’t want to wait. I managed.

Best gelato-on-the-road of the year: Dolce Stella in Riva del Garda. It actually opened only in 2017. You find it in Via Dante Alighieri, 86. I had stracciatella, a ricotta-based ice cream with nuts, and Mascarpone with honey. Finishing long rides with ice cream is a good tradition of mine. Sometimes, I also feed myself with ice cream along the day. I find it particularly comfortable on hot days, and there were many.

For the first time really, I had been active throughout the entire year. There were some breaks, mostly towards the end of summer, but Zwift helped me to keep training in the cold and dark months. The graph below shows the evolution of my fitness through 2017. It’s a concept that says: what you have done most recently makes you tired and fatigued. What you have done lately builds your strength and form. The difference is your fitness. Ever more intensity will also increase fatigue, so that at any level of intensity, fitness levels above 100 indicate good preparation for a race, and levels above 120 are rare.

I managed to build my form well towards the Transalp in July and then maintained it for a while. All that came mostly from adding time, so my actual performance on the road did not improve much since April. If I want to improve in 2018, I’ll need to add intensity. My best progress in speed came from three months intervall training on Zwift. Out on the rode, I hate doing intervals. Professional training experts might also advise me to add more accentuated targets, and to take a more extended period of rest in between.

A comparison across the years

Numbers of one year alone are not telling the full story. So I actually had a look at 2017 in the context of my previous years. I’m on the road bike since 2007, when I bought a Trenga De that I lost in 2011. (For a long time, I thought it got stolen. Years later I considered that the city had taken it because it was parked wrong.) Originally, I tracked my training with a HAC5 cycling computer that couldn’t do GPS. I had been a bit lazy in syncing it and so I noticed only in late 2011 that data from July 2010 to August 2011 was missing. I restored my ride history from that period by memory and by looking up what I wrote about on my previous (now defunct) blog. I got pretty close, but there’s certainly some missing data.

In 2013, I switched to recording my rides with OruxMaps on my smartphone. At that time, it was a Sony Xperia Ray, and I think it already did great in comparison to dedicated bike computers from 2017. The industry is moving back from apps to devices, but I have a different opinion on that: Rather than fixing proprietary software on dedicated devices, I’d fix the small bits of hardware that people complain about with their phones (read: a better GPS chip, a big battery, and a rugged case).

In 2014, I spent the spring in Austin, Texas, on a Schwinn that I had bought on my first day in the States and that I sold on the last day over there. For these three months, I actually owned a road bike with a carbon frame. I liked it, and yet it was not as dynamic as my Rose Pro-SL 3000 which I cycle for already seven years now. I’ve also done some rides on loaners (from friends, mostly).

For the benchmark, I only look at cycling on the road. No hikes, no cross-country skiing, and no virtual rides. It’s the essence of my sportive activity, as I’m a cyclist first. And it gives an interesting perspective to this “better-than-ever” season. It actually wasn’t so much better than ever.

It only finished strong.

Really, I made the difference between 2017 and any other of my strong seasons between August and October. Until early July, it was not even my best season yet. I had been riding more in 2015 until I crashed. Until June, my best season instead was 2012. The end to that season came with a number of conference trips and a summer school.

The Transalp in 2017 was the earliest summer vacation that we ever did. It was also the one in which we covered most distance. It catapulted the 2017 season to the front. However, in most years, I did not cycle much after the summer vacation. In 2017, I used my shape for some long weekend trips to the lakes, as the girl was here and there with friends and family. I had the unusual benefit of lots of extra riding time without sacrificing on work or family.

The other months that contributed strongly to the overall outcome where April and June. It’s difficult to see in the above graph, but my 2017 April was the strongest such month ever. I cycled 815km in that month alone. In June, I only did 600km, less even than in 2015, but I maintained consistency and didn’t experience the usual June stagnation that I had seen in many years. I mean, I did ride less often. I rode longer instead.

Making use of Lombardy’s bipolar geography, I spent a lot of my time going up mountains. The Lombardy effect kicks in already in 2015, when a few rides in fall brought me beyond 20,000 of climbing. Then I more than doubled it in 2016. In 2017, I did enough climbing for two times the Tour de France. Which, however, sounds very unimpressive and puts all of this in perspective again: I’m just a bloody amateur after all.

On my low level, I had been improving. The final graph shows only rides from 2016 and 2017 with their average speed. In those two years, I had been in the same location. Location will have an influence on average speed. It’s not flat everywhere. There is no good cycling infrastructure everywhere. There’s wind somewhere. And so on. In 2016, I had a good and fast autumn. In 2017, I had a very fast spring. From this graph, it looks like the Transalp broke my speed. That’s partly because afterwards I was not motivated anymore so much for small rides around Milan and rather focused on longer distances to destinations.

Zwiftinsider just published yesterday my goals for the 2018 season. I stated:

[…] I want to get back two KOMs close to home, cycle to Genova, and finally cycle up the Gotthard, Nufenen, Susten, and Grimsel.

There are a few more. The whole area of the Dolomites have mountains that I yet have to tackle. So far, I’ve only done one of four of the Sella-Ronda (the Passo Gardena). I don’t have GPS records of my 2011/2012 Transalp, and I would gradually like to re-ride those trajectories to fill the map and get my Strava segment positions. I also want to bridge Südtirol/Trentino and Lombardy with a ride over the Passo Tonale, and I have some intention to do a Stelvio double, in which I start from Bormio, then descend to Prad, and get back to Bormio via the Umbrail-Pass, the Stelvio’s big little sister. That sums up to a lot.

Much of this is focused on experience rather than speed. It will be yet another non-competitive year. But, you know, there are some KOMs around Milan where I am currently second or third. I will give it a try. Because… why not?