I have the privilege to finish this year from our second home in Bozen. A day before we arrived, lots of snow fell again on the elevated areas (and even the valley looks like someone put a bit of powdered sugar on it. Some cars are still driving around with 20-30cm of snow on their bonnets and roofs (totally unsafe, by the way).

I’m using this occasion to explore some skiing areas that I know well by name (and from television), but not by experience. This time I’ll be on the way to Alpe di Siusi and Val di Fiemme (where the Marcialonga takes place). However, my first area was Deutschnofen (in Italian: Nova Ponente), where I also rented the ski.

I rented there because on the final day it will only be a detour on the way home, as it’s South of Bozen. It’s still 40min up from Bozen, but to this date I haven’t found any ski rental closer to the city (or even in Bozen itself). An alternative I had considered was in Seis am Schlern (in Italian: Siusi), but that’s in the wrong direction and it was also more expensive: In Deutschnofen I paid for the full Nordic set including shoes what in Seis I would have paid for the set without shoes (just below 60,- EUR).

I rented at Skirent Eggental. They have continuous hours every day during normal opening times. I did not get much consulting, but I also didn’t ask for it and was rather certain in my choice. He gave me the ski that another guy had just returned. They still had drops of melted snow on them. (Not that it matters.) He was happy that it went out again immediately. Ski rentals should usually give it a proper check. On the positive side, he gave me good advice on how to find the track and where to go, and he was very polite. We agreed on payment upon return. He took a copy of my passport, of course. [Update: He still immediately recognized me five days later.]

He gave me a Fischer Fibre Crown. That’s a cheap entry-level ski (it retails for less than 100,- EUR). It’s easy to handle, and I could even manage some skating on slightly falling tracks; it’s (very) slow, it doesn’t slide far on soft snow (good technique can help only so far), but on such terrain has a lot of grip potential when the track goes up. However, it’s pretty much what all ski rentals that I have used in the past hand out. Except one. I’m considering buying.

There’s a parking right next to the rental from which it’s a 5min walk up the mountain to the cross country track. Up there is also another parking. Note, however, that it’s only the connection that in either direction adds 2km (one-way) to your day in order to reach the actual tracks. There are parking locations at the starting points as well.

The most amazing thing about this area is the spectacular panorama. Deutschnofen is situated on a high plateau with gentle hills, and the peaks of the Dolomites (Rosengarten, Latemar, etc.) are often very visible. Hence, this is an area that you want to visit with good weather. Otherwise it’s wasted potential (and it would have been better to stay in some valley).

The most annoying thing is the lack of signage. I had looked at a map of the area before departing, but had forgotten to download it on the phone and take it with me. Usually, you will have at least some map at the beginning. In this case, I would have expected more than that – after all, they are competing with so many famous destinations around that they need to make it up with service. But I found nothing. No map, no single sign that I could use for orientation. [Update: When I returned the ski, I had a quick chat with the guy from the rental shop. He said that they normally put signs, and that he wanted to contact them.] 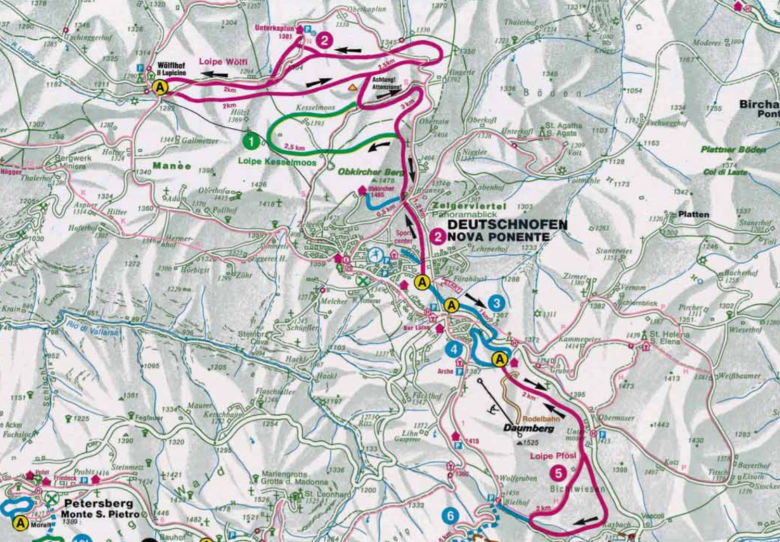 I had started with the connecting track to the Wölfl track. This meant a gradual ascent for about two kilometers. Nothing that a beginner couldn’t do both ways. At the end of the connection, I didn’t know whether to go left or right, and I went right for the nicer view. Four kilometers later, I reached the same point. (I didn’t recognize it at first. Only when I looked at the phone, where I tracked my journey to see how accurately it could handle the situation.) I went back and actually missed the Wölfl. Instead, I had done the Kesselmoos track.

Apparently, half-way there had been another connection. I had seen a couple coming from there, but that connection was not well prepared. There was only a skating surface, no classic track. I don’t know if the Wölfl was better prepared. Supposedly it is one of the highlights of this location. Arguably, signage might help people to find it. Or even find back to the village. There were very few people (I maybe met 10 during the two hours I was there). I was not the only one without orientation.

Sorry for the shaky footage. This was filmed on a chest-mounted Mobius camera from 2014, and I had no idea if I got the angle right. Well… it was a first try. It still gives a good idea of the conditions and the views.)

I turned back to the start and then tried to go in the other direction. That was not very successful either. In that direction, the connection to another loop track was not well prepared. Only occasionally, I saw traces that helped me to figure that it was not just a winter hiking path, but a cross-country skiing trail. After 1.5km, I reached a biggish glade next to the street that leads into the village. There is another parking and the glade hosted a 500m practice loop. In principle, from here another long loop should have started. I didn’t find it. [Update: A few days later, when I drove into the village for returning the gear, I saw it. After crossing the street to the practice loop, turn and stay left and follow the street for 50m or so. The track is not actually connected to the practice loop.]

At that point, I turned around again. I didn’t have time to give another try to finding the Wölfl (by now I guessed that there might have been more), so I ended it with just 11km. Well, it was only the afternoon anyways, but I would have liked to make 15km or a bit more.

There are certainly some food options in the village. I didn’t make use of them. Supposedly, the Wölfl track reaches a restaurant. During what I did, there was no opportunity to grab a bite or warm up outside of the village.

I was rather disappointed with a big lack of attention to details. But the views are fantastic. They are worth going, especially on a first day. They are still worth going if you have been to other nearby places already. It’s a nice one for half-a-day. Another village close-by offers more tracks – that could be combined into a full day. Also, Passo Lavazé is at the end of the same valley.

Oh, if you come in Summer… hip-hop has reached the local youth.