We've crossed the highest mountains... indeed. Lengthy description of how we took on the Stelvio.

This July, I crossed the Alps with a group of friends. We went from Munich to Como, so this was kind of like cycling home for me. The way we followed was maybe a bit unusual as compared to most Transalp routes that I have seen floating around, so I labeled it a bit encroachingly the Zweiradberge-Route – that’s the name of our Whatsapp group. I already gave a synopsis of the route some time ago. Now, stage by stage, I want to go a bit more in depth with the route.

And here are details on stage 5. Complete with a link to my Strava ride, a most insightful visualization of the route generated by Relive.cc, and the YouTube video that summarizes our experience.

Das Stilfser Joch… the Stelvio. This epic climb. 24km from Prad, 1,800m elevation, a final height of 2,760m. This is really a lot of a lot of climbing. And yet it’s basically the last challenge on the way to Lago di Como.

The Stelvio comes in a few stages. The first bit stretches all the way till the first two hairpin turns and is characterized by a change of steeper and flatter episodes. Shifting up on the flat bits really saves time. In fact, at the first hairpin one has already completed a third of the distance. After the first two hairpins comes a steep ramp, then things get a bit more modest again until Trafoi, which is the last village before the peak. There are only two loose settlements afterwards, nothing which actually looks inhabited. Next up is the first larger group of hairpins through the forest, at the end of which a steep ramp leads out of the forest. Now it’s basically a long straight, interrupted by just a few more hairpin turns about half-way. This straight leads to the final group of hairpin turns. Those are never longer than 500m, which helped me with the motivation, but the last six turns or so become really steep.

I had been worried in the morning, as the weather forecast was not very good, and convinced my mates to depart early. So we would have a chance to get down before it was to start raining. Well, without a break, Reik, Martin, and I would have made that, but Dominic and Matze would have hit the rain in the descent anyways had we not taken the necessary break. At least it didn’t rain for long and dried up to rather save conditions satisfyingly fast. And once in Bormio, it was all dry and sunny again. 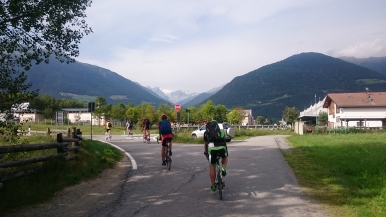 I’ve been on the Stelvio already in 2016. Back then it was a Sunday and there was a lot of traffic in terms motorbikes, cars, and other cyclists. It’s still a unique experience, but motorbikes and cars can be quite annoying in their frequency on the Northern side. This year, instead, it was a Thursday – and traffic was not much of an issue, I found. On the flip-side, there’s also less other cyclists to group up with.

Our own team is rather heterogeneous in strength. In principle, it used to be Reik just ahead of me, then often Dominic ahead of Martin or Matze. The Stelvio reshuffled things. Usually, I would just lead out Reik until he got tired of staying on my wheel, but I accidentally dropped him already very early in the climb. I then pushed on, expecting he would catch up with me later, but he never got back. In the end, some of my advantage faded on the last two kilometers, but I still arrived 15min earlier.

He was suffering much from saddle sore, while I also had experience with the climb and knew from last year that I could go with some speed into the first two thirds before I would actually start to get tired. Which is at odds with the pure numbers, since the Stelvio has a steep average gradient of above 7.5% and frequently ramps up around 9%, but I somehow manage to recover very well in the short flat sections of the Stelvio’s many wide hairpin turns. 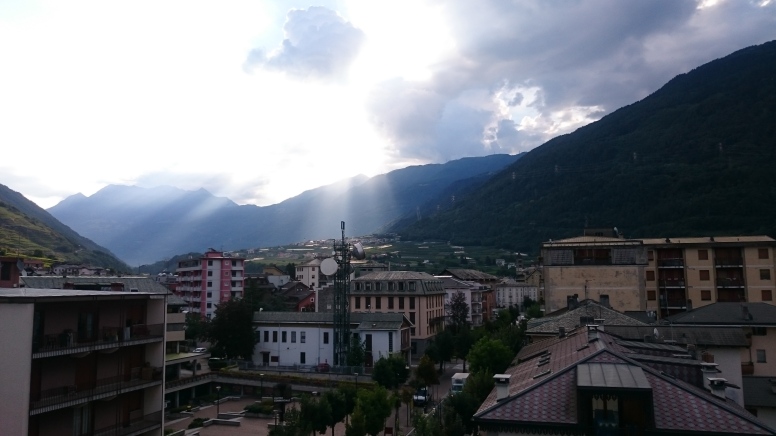 Next to arrive after Reik and me was Martin, about 45min later than me, who stoically did his job without actually going into the red. Dominic followed in fourth position, investing much time into pictures and short breaks, in between which he went with rather high speed. He managed to even put out a something like a sprint to the finish line. Matze was last, almost 90min behind me (my time had been 2:22:56), but like Martin in good state as he had just chosen his comfort rhythm.

I may say that this is quite some impressive stuff: Martin and Matze both carry 95kg, and Matze and Dominic both did not manage to get more than just 1,250km of training kilometers before the Transalp. All of them being able to get up the Stelvio the way they did – after a challenging stage the day before and in total already four days of cycling – I have a lot of respect for that.

Expecting that Reik and I would need to wait a lot, I had prepared a dry jersey in the backpack. As soon as I arrived, I did not only put on jacket, arm warmers, etc., but I completely changed my clothing in order to be warm and dry. We had a Bratwurst, and as soon as Martin arrived searched for a seat in one of the bars to warm up with a hot chocolate while we waited. First for the other guys, then for the rain to end. We saw marmots. And a woman who for whatever reason had not even taken a rain jacket with herself and was destined to go down in nothing but her short-sleeve jersey. She was happy and proud nonetheless.

After the downhill to Bormio, we mostly followed the bike route of the Sentiero Valtellina. I say mostly because at times I navigated us back on the normal road along the villages. This road is basically free of traffic, since that one runs over a more recent main road build for higher speeds. I sometimes did not trust the pavement of the bike route would actually be asphalt, but it turns out that recently they must have done quite some work. Very likely the bike route is now really in perfect condition all the way between Bormio and Tirano.

Be aware that there is often headwind coming up the valley, so while the profile looks like it’s always downhill from Bormio, the first 15km can feel quite challenging still. It’s usually also warm and humid, but the views are nice. Mountains are steep here on either side. At least there is plenty of water supply in Valtellina. On the way up the Stelvio, there is a fountain in Prad, then in Trafoi and again something like 4km from the peak.

So we reached Tirano: 95km, about 2,000m of elevation (basically only the Stelvio). 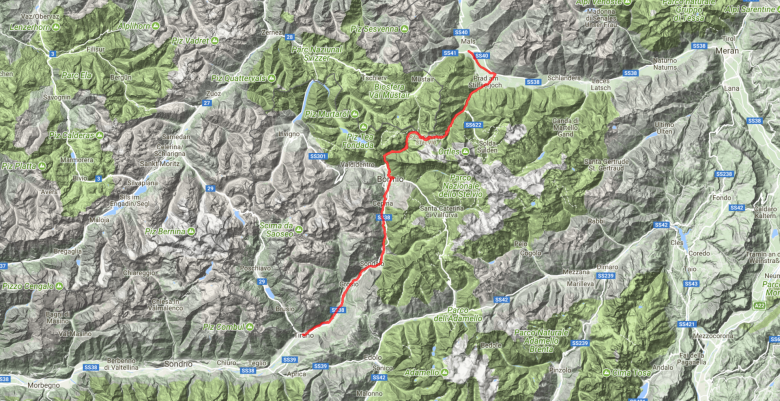 Tirano has a number of options. We picked the B&B Hotel Tirano, which is located directly at the train station and the main road of Tirano. I’ve heard that the traffic will soon (read: in five years or so) make a detour around Tirano through a tunnel, but for the moment, it does not. Yet, the rooms were actually silent, even with the window open. The innkeeper is extremely polite and helpful. I speak Italian, but he would also speak enough English. It’s a very economic option as well. Most importantly, he can provide a safe space for the bikes.

In case of rain

Well, this is tricky. There is no good way to directly cross the Stelvio, since the bus from Prad does not transport bikes. Bike shuttles have to be reserved the evening before. The bus from Bormio might transport up to two bikes in the trunk, not well secured. The Postauto from Mals connects with another one in Santa Maria Val Müstair which does take bikes up the Umbrail and the Stelvio. The same Postauto from Mals runs back to Zernez, from which a train goes to Sankt Moritz. There, it’s possible to take another train via the Bernina-Pass to Tirano. Since these lines are both part of the Rhätische Bahn network again, expect steep prices, however.

Make it more or less challenging

There are plenty of options if one does not want to ride the Stelvio. For instance, if one would stay over night in Santa Maria Val Müstair and only climb the Umbrail-Pass, this would save something like 500m of climbing. That’s the only option coming to my mind to make it easier, by the way.

After the Stelvio, there are three main options to increase the difficulty. From Bormio, one could go via Passo di Foscagno and Passo d’Eira to Livigno and either finish there or continue via the Forcola di Livigno to Tirano. But be warned: This is a lot even for really well-trained cyclists. A bit less insane is an option to also cross the Passo di Gavia (>2500m), in which case I would recommend to sleep in Ponte di Legno or Edolo. Else, there’s also the Passo di Aprica to cross to get back to Tirano. Finally, in Manzo starts also the classic route up the famous Mortirolo, from which a ridge road would lead almost flat over the Passo di Guspessa and the Passo di Trivigno to a downhill right into Tirano. Streets are narrow and rough there, and the Mortirolo is rightfully known for extreme steepness.