Skip to content
It's getting steep while we reach high altitudes. Three times climbing, three times getting down again. Effort, yet massive fun.

This July, I crossed the Alps with a group of friends. We went from Munich to Como, so this was kind of like cycling home for me. The way we followed was maybe a bit unusual as compared to most Transalp routes that I have seen floating around, so I labeled it a bit encroachingly the Zweiradberge-Route – that’s the name of our Whatsapp group. I already gave a synopsis of the route some time ago. Now, stage by stage, I want to go a bit more in depth with the route.

And here are details on stage 4. Complete with a link to my Strava ride, a most insightful visualization of the route generated by Relive.cc, and the YouTube video that summarizes our experience.

Of all days, this route is the most straightforward: From Davos you follow the signs to the Flüela-Pass, then you cross this mountain, and at the end of the street, you turn right to Zernez. In Zernez, you again follow the signs (this time to the Ofenpass or Passo del Fuorn, which is the same mountain anyways), cross that mountain (and on the way there also the Ova Spin), and after the border to Italy you hold yourself on the street towards Laatsch. There, we turned on the bike lane through the apple fields to Glurns, because that’s where we had accommodation.

My Strava track deviates from this description in one aspect. After we reached the Engadin in Susch, coming down from the Flüela-Pass, we took what we thought was a paved agricultural road, but this turned into a gravel track after 2km and remained unpaved until 1km before Zernez. It’s doable also with a 23mm road tire (which I still ride, since my bike doesn’t fit wider tires) and maybe makes it a more natural experience, but still: it was an unexpected bit of gravel. The satellite images had misled me here.

I did not find many fountains along the way. There was none all the way up the Flüela and none between Zernez and the Ofenpass. A COOP supermarket in Zernez helps with filling up supplies, while there is also a fountain in Susch. After the Ofenpass, fountains are somewhat less necessary (after all it’s going down), but a bit more frequent to find in the villages.

Note that you will pass Santa Maria Val Müstair, from where you could already take on the Stelvio. 500m after the village, you will pass a street sign which in the opposite direction announces the crossing where you would turn left. This sign is famous from the 2017 Giro d’Italia, as it is the spot where Tom Dumoulin gave a shit on the race. Unfortunately, while it had been my plan to take a photo, there, we forgot it at that moment.

On day 4 only, we went beyond 2,000m of altitude and towards more or less 2,000m of total climbing meters in one day for the first time. That’s late in comparison with more Eastern routes, where the Kühtai and Timmelsjoch could be early highlights. For some, this might diminish the attractiveness of the Zweiradberge-Route, while for others, it helps to remain fresh for the Stelvio challenge. Still, this was a tough day for most of us. Seriously. Apart of 10km between Susch and Zernez, it was either uphill or downhill.

Now, the Flüela was a comfortable affair at the bottom, but as soon as we reached the end of the forest, the difficulty increased, and after the first pair of hairpin turns, we also got exposed to quite some headwind. It was also right after breakfast, so while you’re fresh, you should not overeat. As a side effect of the early time, it was rather fresh on top and I was happy to have some warm layers with me while Reik and I, who basically arrived together, waited for our mates.

The downhill was wonderful. Wide roads, not much traffic, no crosswinds, great views, good surface, and a few hairpin turns for the fun. Same for all the downhills of the day – just the second one from the Ova Spin is currently a bit cumbersome, as there are road constructions to renew the surface.

Traffic indeed! There was very little, despite what I occasionally read for the Flüela. Really. Nothing.

But remember: It’s not just the Flüela-Pass and the Ofenpass. There is also the Ova Spin in between. Usually, it’s treated in one go with the Ofenpass, but this can mislead into the idea that it’s not that much of a challenge. Instead, it is. It’s 6 to 7km with an average gradient of 7.5% – and since the first and the last 500m are almost flat, the incline actually ramps up beyond that.

Eventually, the Ofenpass is not much of a challenge, would it not be for the final two kilometers. That’s 2,000m of suffering. You see the radio tower at the finish, but you also see the steepness, which all of a sudden goes from 2 to 5% to 9 to 12%. It’s just 2,000m, but no matter what you do before, you will almost always have done much climbing already.* In German cycling slang, we call this a Scharfrichter – a climb that separates the good from the bad legs, one that gets you down to will and determination, even though it’s by itself maybe just a minor challenge.

(* Except for someone who only starts in Livigno. By the way… using the tunnel shuttle to Livigno after the Ova Spin is a possible alternative, in which case you then have other options to continue the route the next day – but the Stelvio will most likely not be one of them.)

Statistics tell it’s just 85km with 1,900m of total elevation. The landscape changes much again, as the upper Südtirol is already dominated by apple farming. The water sprayers look funny from afar. 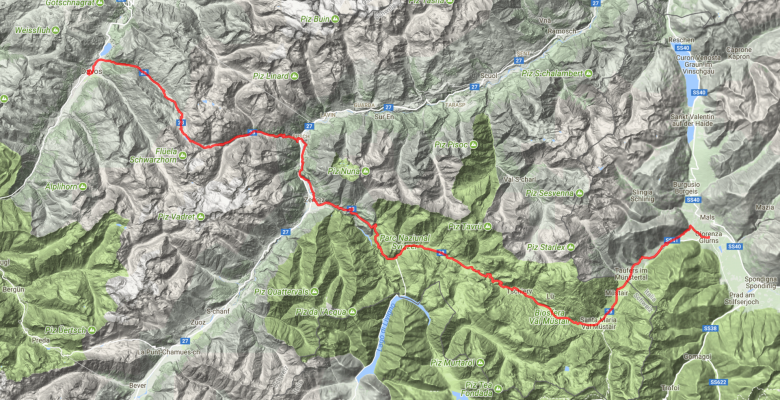 On this stage, another recommendation for a truly outstanding hotel. WiFi strength in the last floor was the only problem. You cannot separate the Grüner Baum from its sister hotel on the other side of the street: Food is served in the Baum, but the bikes are parked in the Belvenu, which also hosts the wellness area. This wellness area includes an outdoor whirlpool with perfect view towards the Western/Northwestern end of Südtirol. We booked with dinner included and were very satisfied with the served three courses plus amuse-gueule. The rooms are unique in their furnishing – it’s an interesting blend of old and new. 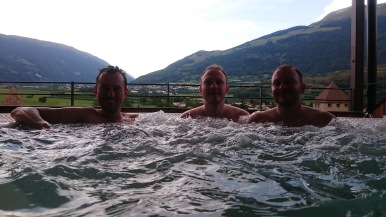 In case of rain

There is a train that connects Davos to Klosters (Rhätische Bahn), from where another train runs through a tunnel to Susch (and overground continues to Scuol). Change again and you get to Zernez. There is also a Postauto directly from Davos over the Flüela to Susch, and then another Postauto from Zernez to Mals (which is basically 5km from Glurns).

Make it more or less challenging

More challenging would be a version that leaves Davos towards the Albulapass, but this adds 85km to the stage. It would work if one also opted for a more challenging version the day before and had cycled up from Chur to Lenzerheide instead of from Landquart to Davos. Else, if you sleep in Klosters rather than in Davos, you still would need to add the final 6km of the Wolfgangpass. You can also maintain the route as it is until Laatsch and then add a loop up to the Reschensee – depending on how far you go, this adds 30 to 45km and about 750m of climbing.

It’s easier if after the Flüela you turn left towards Scuol and then climb up the Norbertshöhe from Martina. In that case, you arrive in Südtirol via the Reschenpass and the Reschensee. It’s 20km more, but the climbing is less challenging.

When the rain caught me by surprise on top of the #sanetsch, for once I was happy that the descend wasn't a road. Without jacket and gloves, I'd have been freezing. Also, it makes for a unique road bike experience to go down by lift.
A week ago, I spent a happy weekend in Südtirol with @anyuchenay, @mathimuc, and his girlfriend. Gelato was included, and some long hours on the road were a welcome rest amidst some restless days. We'll be together again.
I often talk about how gelato stops are important elements of my Italian rides. It's only logical that I "joined" @q36_5 's Team Gelato. (i.e. purchased the jersey.)
One of the longest, one of the prettiest climbs in the Alps. An iconic bit on the Italian side of the Passo dello Spluga are the few very short switchbacks that are stacked on each other. Leads to lots of epic pictures that road cyclists dream of.
Me and Fausto, a story in four episodes. Fausto's monument stands next to the church of the Madonna del Ghisallo, 580m above Lago di Como. For decades, the local priest collected bicycle memorabilia and displayed them in the church. Today, long after his death, the church at the end of this iconic climb is a destination of "pilgrimage" for cyclists. Read: have an excuse for a day out at the Lario and its awesome deep blue waters and high altitude mountains on all sides. Today, I was nearly alone, but full of happiness about finally riding like it's Summer. Well, until the sweat started to run into my eyes...
Warm summer weather two days after the pass opening following a long period of cold: This is the perfect recipe for the first high altitudes ride of the season.
Sometimes you just catch the right conditions for a perfect ride. Today was that day.
Me and her, stones and the sea. For a change of routines, we took up a hike while we escaped the rain in Lombardy. Camogli is the place in Liguria I've visited most often. I've still discovered unseen treasures, like this abandoned fortress and that crack in the earth that told of how tectonics shape the earth.
Tulip time, but not at the usual place! When Spring in Switzerland brings up unexpected memories of riding in Holland.
Follow Onabike.cc on WordPress.com