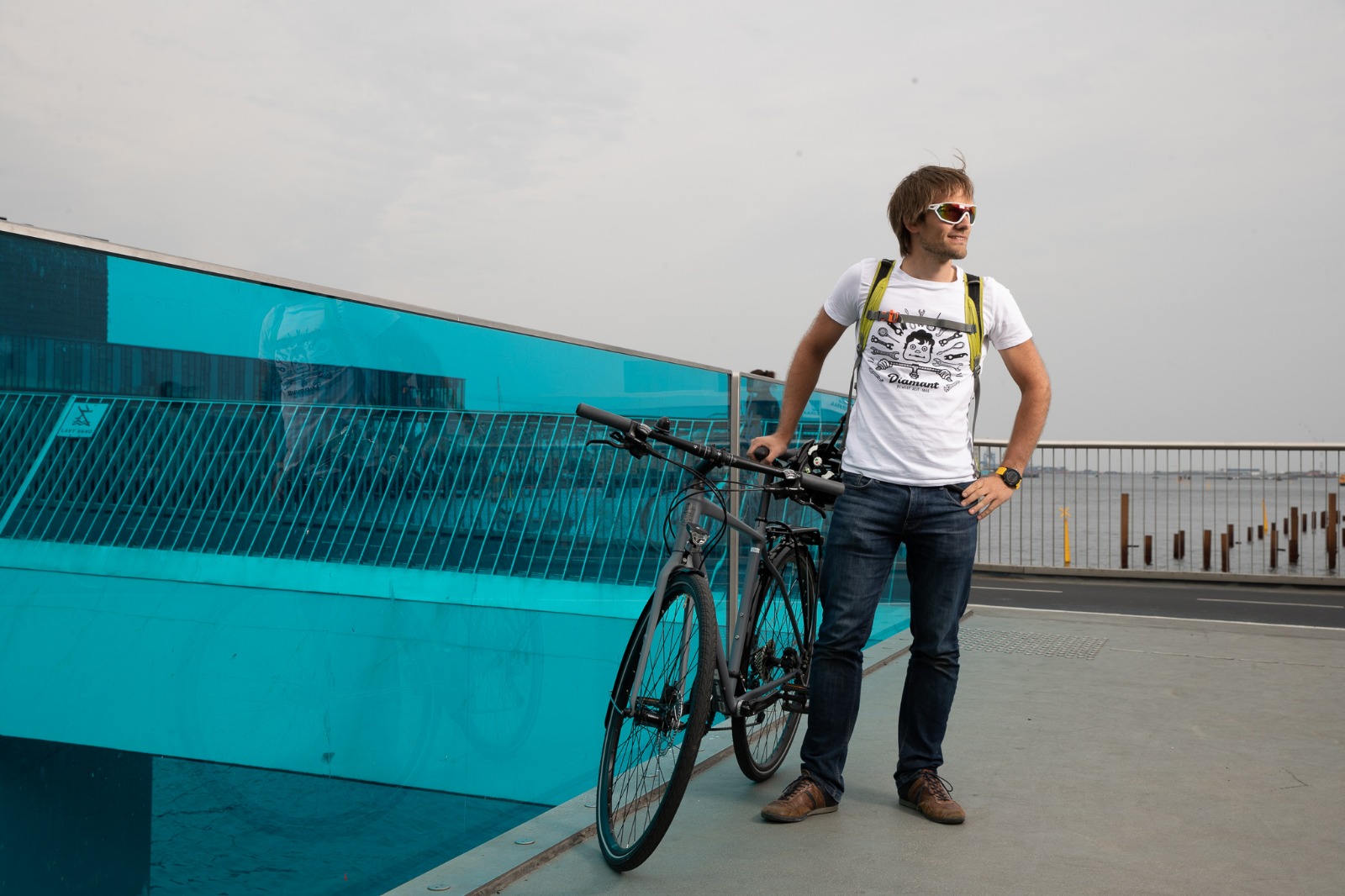 I wrote a similar post to this last year. I had just qualified for the 10000KM.cc – a club for people cycling at least 10’000km in one year. I was already sending out applications and by all means I expected 2018 to be an exceptional year.

Then Trek hired me to manage Germany’s oldest continously existing bike brand. I spent less (read: no) time on the blog, but I kept cycling. Even earlier than in 2018, I renewed my 10000KM.cc membership. Just in case you wonder: this is an exclusive club: Only 1% of all global cyclists using Veloviewer (which is a above-average performance oriented demographic) ride more than what I did in 2019.

Last year, I took this as a reason to donate 100,- EUR to Qhubeka. Now, this year, I’m going to donate 1ct per kilometer to World Bicycle Relief. That’s another charity to bring kids on bikes. It’s the one we at Trek support with a fixed share of our profits.

Of course, there’s an infographic again. And towards the bottom a set of twelve highlights of riding in 2019 (one for every month). First, though, the macro perspective with data.

But the interesting changes are in the details. I spent 179 active days (basically every second day of the year) on the bike compared with 108 last year. If I’d be like Jesus, I could have cycled straight to the Cocos Islands. Instead, I ate generous amounts of Cocos gelato (though less than last year; 2019 was the year of Cioccomenta). I did less longer rides, but at the same time I did a new longest ride ever (in Spring), and my first ride ever with more than 5’000m of climbing (at the Ötztaler race in September). Now living in Switzerland, I climbed Mount Everest two times more than last year.

All that means: ride your bike to work and you can push out some impressive numbers. One way from Winterhur to the office at the outskirts of Zürich takes about 18km. I need about 35-40min door-to-door. By car, it’s usually around 25min, and by train 30min. It’s a small marginal investment in time and at the end of a sunny day I’ve clocked in 40km by doing nothing than going to work and coming home. Likewise, I spent two weeks out of office in July. We hosted our German dealer show in that time-frame. In order to keep riding, I woke up just after 6 every morning and went out on a ride with some colleagues.

Regular communting was the underlying basis for cycling even more than 2018. Only since European summer time ended, and darkness would hit me on the way back, I stopped piling up kilometers. Coincidentally, I had a streak of weekends that I couldn’t spend on the bike. You see the effect of that in a much faster decline in my fitness compared with last year. (In exchange, individual long rides had a stronger rebound effect.) I can feel that. Time to get back on the trainer. I didn’t have much Zwift motivation lately. It shows.

Much of my riding was focused on the Alps again. I used my chances to revisit old favourites in Südtirol and at Lake Como. It’s the first year in many that I didn’t make it to Lake Garda. I did however return to Holland. Overall, my geographic reach is far larger than it was a year ago, since I took the bike on many business trips to bike shows around Germany. I also explored my new home region so much that in just one year, I covered a larger set of 1x1km tiles than previously in Rotterdam (where I rode for five years) or in Milan (where I rode for three).

The 1211 highlights of the year

This year, it’s December already. I didn’t ride outside in January, so like last year it’s 11 highlights to talk about

On Valentine’s day, I did my first 100km ride of the season and my second outdoor ride at all. What’s more, it marked the end to my interim adventures in Munich. I had planned the loop already in 2018, but time had run out. No other loop now made my stay feel as complete as this one. Ironically, while I was on the way, I received a call from another company I had applied with. We mutually agreed to be each others very close second-best option.

Just a bit of a month later, I was cycling to work quite regularly. One warmish weekend day, I took the bike and rode once around Lake Konstanz. I stopped the right after 252km. Never had I ridden that much in just one day. Soon after, I felt strong enough to register for the biggest race of all.

In April, I visited friends from Rotterdam that had moved to the Harz. Ten years earlier, I had cycled in the region for the last time. I had climbed the highest mountain in Northern Germany on a mountainbike loaded with lots of luggage, but it doesn’t count if it’s not on Strava. Now it is.

I have emotions left in Italy. There’s the pancake, but there are also Italian Alpine roads. There’s the Giro. On the last day of May, I combined all of that. First, I did a long loop at Passo Rolle and into a very beautiful part of the Dolomites. Then I stood on the side of the road as the professionals took on the same climb that I had done first on that day. In the evening, I picked up the pancake for a great weekend together.

Almost impossible to pick just one ride in June. Looking at the list, there’s so much great stuff that happened. I still haven’t edited the video of our three days cycling in the Dolomites. I’ve not blogged about how awesome it was ride those races in the heart of the Swiss Alps. I never mentioned on the blog that my car had been broken into. Here’s the highlight though: On the first day of the month, the pancake rode a road bike for the first time ever. She looks great in lycra.

Previously, I’ve written about how an average cyclist can earn a KOM. I learned more about that during my time in Munich and my early months in Switzerland. Not in every region such a thing as hidden roads exist. The good cyclists will have been on all of them. I wouldn’t get another KOM, I thought. Until I did. And then another one. And later another one. My first Swiss KOM definitely was a highlight. I had gotten much faster.

For the fifth time, I spent my summer holidays on the bike in the Alps. We were five this year at the start. There was a big crash for one of us. It’s the one moment we didn’t catch on camera. Maybe that’s better. I compile these seven days into one highlight. And here’s the playlist of all videos from that week in August.

No question as to what was the highlight of both September and the entire year: The Ötztaler Radmarathon. 232km, 5200m of climbing, and 10h, 23min on the bike. A great adventure turned awesome with the surprise visit of friends, who came to welcome me at the finish line. This used to be something that I deemed impossible for someone like me. Turns out it’s not.

I had a lot of time left for riding in fall, as I also had to use up my holidays. For the first time I explored new areas in order to extend the season in warm territory. My first destination was Nice in October, which I found to be an amazing area for riding roadbikes. On the last day over there, I rode up the Col de la Madone. For the Trek crowd, that’s a mystic climb. Our flagship bike carries its name.

Another weekend in November brought me to Mallorca. Martin joined me. All sorts of prejudices in my mind, I arrived on the island. Yeah, they are all true, but in fall, you have lots of space to escape into quietness. My favourite ride on the island was the second day, which had a share of both the scenic climbs of the Tramuntana mountains and the gorgeous countryside more inside the island.

So we arrive in December. It’s actually easy to pick the highlight in that month. There was only one big ride. Just another 100km, strolling over my local hills that I came to enjoy very much since I moved. I finished in Konstanz and rewarded myself with tasty stuff from the Christmas market. While I rode, I saw the snow-covered mountains in the back. I was thinking about all the new rides that I can do in 2020. I really can’t wait for the season to start.

11’000km are many. My legs knew. Now they don’t know anymore. With little riding in December, my shape certainly went down. I start where I was a year ago. You could call it the circle of life. More appropriate: two wheels of being on a bike.