Skip to content
We're going on a Transalp again. This year, we follow the Großglockner route through Austria. In seven days, we'll be cycling into Venice.

German cyclists are a particular group of people. No matter if they are mountainbikers, road bikers, or e-bikers, they fancy the idea of cycling all the way through the Alps to Italy. The most famous routes start from Mittenwald or Garmisch-Partenkirchen, lead through Südtirol, and end in Verona or at Lake Garda.

I’ve done my first Transalp in 2011. Most years since then, I’ve returned to the mountains. This year will be my fifth Transalp. That’s how us Germans call this idea of a multi-day ride through the Alps from North to South. We had big fun last year.

In 2017, we chose an unconventional Western route. I called it the Zweiradberge-Route. It was definitely a bad choice from a marketing perspective. The route was amazing. It featured famous mountains like the Flüela, Passo del Fuorn/Ofenpass, Stelvio, and Ghisallo, and it ended in the scenic environment of Lago di Como.

In October, our plans shaped up for 2018. We wanted a challenging highlight, a new finish, but overall an interesting, diverse, and doable route with stages around 100km in length. We are a group of heterogeneous strength. Last year, I did the Stelvio in 2h23min. The slowest in our group took 3h42min. We all want to enjoy the trip.

Then I remembered a bike video that I had watched earlier this year. (This guy cycled Munich to Venice in one go. Read: 500km in 24 hours.) And a thread on Germany’s leading road bike forum, rennrad-news.de, in which another guy presented his ride from Munich to Venice. I recognized that there is apparently a stunning bike route coming down from the Dolomites and then passing Belluno and Feltre on the way to Venice.

The two guys above still crossed the main ridge of the Alps via the Brenner. We’ve done that before. I was wondering how a route to Belluno could play out with a more Eastern route right from the start in Munich.

Eventually, it’s again a route that’s not commonly chosen. It’s not unheard of though in its core. Let’s just call it the Großglockner route to give credit to its highest mountain.

We start tomorrow in Munich. From there, our first day takes us to the Chiemsee lake. It’s a flat stage. The mountains are already greeting to our right. Because we like sunsets, we will sleep on the Eastern shore of the lake.

It’s a warm-up stage. We have 106km to get comfortable with the backpack. And it’s only 1,000m of elevation, spread over a few hills.

The second day leads over into Austria. We’re now surrounded by mountains, but we stay in the valley. Roads rise and fall gentle. There are two passes. They are low and easy. Good to warm up the legs. Our finish in Zell am See brings us another lake to take a swim.

It’s 110km and 1,500m of elevation. There’s some smaller hills, but nothing radical.

Day three features the highest peak of the entire tour. For our group, it’s not bad to have this highlight appear on day 3. The legs are still fresh. The Großglockner is more than 20km long and consistently around 10% steep. It will be a challenge for all of us. Once over it, there’s another small hill that we can’t avoid to get to our destination in Lienz.

At that point, we’re just a stone throw away from the Dolomites. There’s no way to ignore them. We turn West and cross into Italy. For a few kilometers, we cycle in Südtirol. Then we switch to a Southern direction again to approach Cortina. We’ve been here already in 2015. 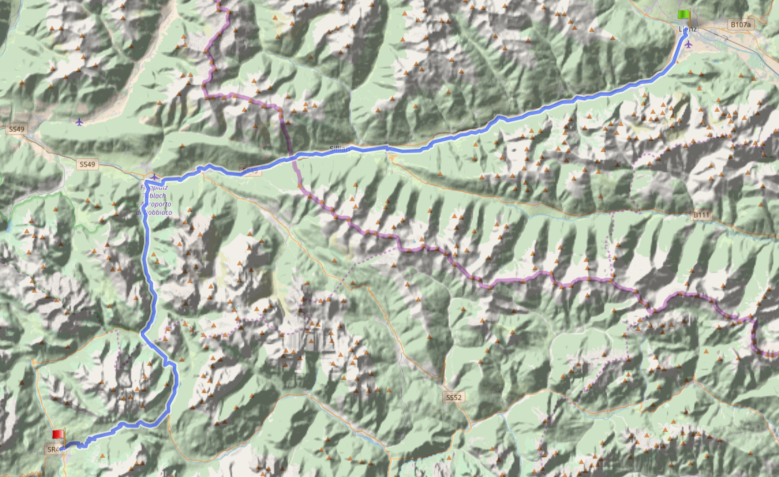 It’s a transition stage, so there’s no clear pass. There’s also never really a downhill until almost the very end. 82km and 1,700m of elevation.

From Cortina, we climb into the Dolomites. Last time, we crossed the Falzarego. This time, our route passes heads to Passo Giau. Then we reach the Sella-Ronda at its Southeastern corner. Via the Pordoi, we reach Campitello di Fassa. It’s only 70km, but there’s almost no flat kilometers. 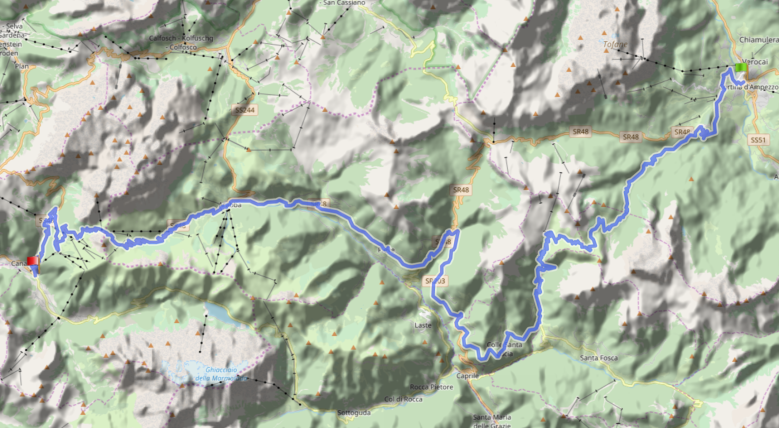 The easiest choice for day 6 would be to continue towards Trento and then Verona or Lake Garda. But our destination is Venice. Among many possible routes, we opt for one through the Cordevole. At the beginning of the day, we cross the Fedaia. Then it’s 60km downhill to Belluno and a flattish ride along the Piave to Feltre.

122km make it the longest day of the tour. (It’s 20 less without the loop to Belluno.) But after the initial climb up the Fedaia, it’s flat.

A valley leads out of the Alps from Feltre. We ignore it and cross a not very famous, but very interesting peak. Architecturally, Passo di San Boldo is a master piece. The road is basically stacked on each other and the switchbacks need to lead through tunnels, as little space as there is.

And then it’s an all flat affair via Treviso to Venice. That’s still some distance: 120km, but only 1,000m of elevation.

We’ve booked one of the two hotels on the islands of historic Venice that can accommodate bikes. The end of the route is therefore a highlight: the dam between Mestre and Venice. On the other side, there’s no way forward anymore. It’s an end that’s an end.

Expect some video footage and blog posts about this trip coming. I’ll write about the route and about some technology we’ll take with us. For the GoPro, I carry the Pro Standard mount system. And I’ll give a real-life test to the Instamic outdoor microphone that reached me a few weeks ago. We have a wide array of backpacks and anyways a number of different bikes. With five years of experience, I’ll also share some insights about planning, packing, and cycling a Transalp.

I often talk about how gelato stops are important elements of my Italian rides. It's only logical that I "joined" @q36_5 's Team Gelato. (i.e. purchased the jersey.)
One of the longest, one of the prettiest climbs in the Alps. An iconic bit on the Italian side of the Passo dello Spluga are the few very short switchbacks that are stacked on each other. Leads to lots of epic pictures that road cyclists dream of.
Me and Fausto, a story in four episodes. Fausto's monument stands next to the church of the Madonna del Ghisallo, 580m above Lago di Como. For decades, the local priest collected bicycle memorabilia and displayed them in the church. Today, long after his death, the church at the end of this iconic climb is a destination of "pilgrimage" for cyclists. Read: have an excuse for a day out at the Lario and its awesome deep blue waters and high altitude mountains on all sides. Today, I was nearly alone, but full of happiness about finally riding like it's Summer. Well, until the sweat started to run into my eyes...
Warm summer weather two days after the pass opening following a long period of cold: This is the perfect recipe for the first high altitudes ride of the season.
Sometimes you just catch the right conditions for a perfect ride. Today was that day.
Me and her, stones and the sea. For a change of routines, we took up a hike while we escaped the rain in Lombardy. Camogli is the place in Liguria I've visited most often. I've still discovered unseen treasures, like this abandoned fortress and that crack in the earth that told of how tectonics shape the earth.
Tulip time, but not at the usual place! When Spring in Switzerland brings up unexpected memories of riding in Holland.
More than 300km in one day. Just last year, I would have told you: I'm no professional. I can't do it. Then a friend did it and I found my curiosity to try. It takes a good route with anti-boring storytelling, some luck (tailwind all day), and a little bit of mental endurance. And a great bike. I finished at Lake Geneva and the Corniche East of Lausanne is one of the most amazing places to ride your bike in this country.
Last spring forced us to be apart for four months. This spring, we keep exploiting holes in the system with (white and not so white) lies. Out on the ride today, I enjoyed it so much that I felt again how much I had missed it last spring. Heirs to movement together. For us, it's literally true: #outsideisfree
Follow Onabike.cc on WordPress.com