Bike sharing in the Netherlands has entered a new era earlier this year, when a Chinese bike sharing companies launched in the big cities of the country, bringing with them the concept of parking your bike anywhere. In Amsterdam, that has already led to foreseeable frustration, because, well, anywhere is anywhere. Before their arrival, Dutch bike sharing was surprisingly much more impractical than, for instance, just behind the border in Antwerp. Or pretty much elsewhere on the planet where bike sharing is based on fixed locations that are spread all over the city center. In Holland, bike sharing existed, but as it was (and is) operated by NS – the Dutch railway company – the only place to pick up a bike were major train stations. Essentially, NS offered it as a service from incoming commuters, not for local residents.

Nonetheless, those yellow-blue bikes have been a key component of Dutch urban culture. The OV fiets (OV stands for openbare vervoer – public transport) also very much reflects the Dutch approach to bicycles: Get it as sturdy as it gets, and then use it until it falls apart. The bikes have always been terribly heavy, came with only one gear, and a back-pedal break as the only means to stop the thing. Which I find ridiculously unsafe, as these brakes do not perform very well, and even worse in wet conditions. But it reduces maintenance cost and opportunities for vandalism.

Now, I had a rather free day yesterday, when the girl left with a friend (who is hosting us) to an outlet center at the border to Germany. I met another friend for breakfast in the morning, but then decided to pick up an OV fiets and justify that I still have a running subscription. My plan was to make a loop around the North of Rotterdam, essentially the roads that I had traveled most frequently while living here. A bit of green, a view on the skylines of Den Haag and Rotterdam (one to the North, one to the South), lots of little canals, a windmill, and some 18/19th century Dutch village-on-a-dike flair.

Tailwind helped me to push the OV fiets to its maximum speed, which is about 26km/h. However, there also was some dark cloud looming to the West, and at some point it got clear it was actually getting a bit larger and closer. It made for a fantastic moment in which the sky on one side looked friendly and inviting, and on the other side rough and rebellious. As the sun was not standing too high (after all, it’s already September), all the bits of water added sparkling lights to the journey. 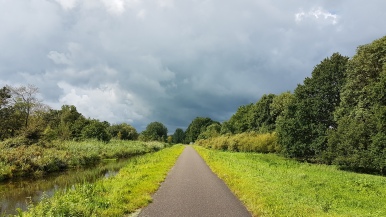 Until I was lucky. I was literally 25m away from a metro station when I felt the first significant drops of rain. Now, I could have continued for five minutes, but for which purpose? Only to find myself stranded in the middle of a field. Instead, I benefited of the occasion, as on Saturdays one can take the bike for free in Rotterdam’s metro, went back to the city center, waited for the rain to disappear, and then finished some business I had to do. Returned to our hosts place by metro, worked a bit, then took the bike to return to city center when the time came to pick up the girls. The benefit: Tailwind again for all the way. And some more amazing views when I crossed the Nieuwe Maas, going over the Erasmus Bridge. 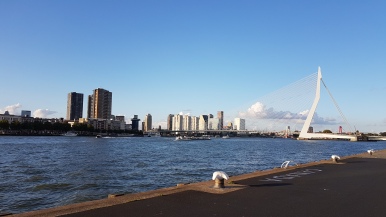 Weekend is near. Time to go to high altitude again.
The Tremola San Gottardo might slow me down, but accelerates my love for riding the Alps.
I don't know if you can tell who is the mountainbiker-slash-splitboarder among us. @guido_anderwert knows all these mountains covered in snow. I took him in my world of tarmac for one day. @lars.waser showed that a Madone can very well ride through the Alps - if you have the legs. And I... I had ice cream. What else?
The Furka is my favorite Swiss climb. First time I went alone. Second time I road with a friend. Third time we were three. A couple times more and we ride it up all together? 🤔😜
One thousand kilometers since @anyuchenay took this photo. We pass too many places that I'd love sharing. Early on Sunday, I'm taking off for adding the next set.
When the rain caught me by surprise on top of the #sanetsch, for once I was happy that the descend wasn't a road. Without jacket and gloves, I'd have been freezing. Also, it makes for a unique road bike experience to go down by lift.
A week ago, I spent a happy weekend in Südtirol with @anyuchenay, @mathimuc, and his girlfriend. Gelato was included, and some long hours on the road were a welcome rest amidst some restless days. We'll be together again.
I often talk about how gelato stops are important elements of my Italian rides. It's only logical that I "joined" @q36_5 's Team Gelato. (i.e. purchased the jersey.)
One of the longest, one of the prettiest climbs in the Alps. An iconic bit on the Italian side of the Passo dello Spluga are the few very short switchbacks that are stacked on each other. Leads to lots of epic pictures that road cyclists dream of.
Follow Onabike.cc on WordPress.com