Skip to content
I'm back in Rotterdam after a long time. It feels like being back home. That feels good.

For the occasion of the PhD defense of my former office mate in Rotterdam, I spontaneously took a flight to Rotterdam after a colleague at Bocconi had offered to take over exam supervision. It was actually only the second time this year that I made it back to Rotterdam. The first time had been just at the beginning of the year, at the end of January. Just one day has passed, and yet I got a full essence of Dutch life and weather.

I started immediately with Vlaamse Patat at Schiphol. It’s kind of a tradition for me to stop there if there’s any time – both for arrival and departure. Outside of flights, I rarely eat French fries. I like them, but they are obviously heavy food, and this habit gives a natural regulation to how much too much I have of it. Later walked a bit through the nightly streets of Rotterdam, enjoyed the lights of the city blinking in the water – of the canals and of the puddles that earlier rain had left around.

Breakfast to go, the familiar sound of checking into public transport with the OV chipkaart, and then, of course: catching up with my folks at the reception after the PhD defense while enjoying a mix of Dudok’s cakes (I had two slices of the lemon-meringue-cake, one of my favorites, but I still find it fascinating how Dudok essentially monopolized cake production for seated gastronomy across the country), borrelhapjes (Bitterballen, which you will not ever see me eating, then little meatballs, small loempia sticks, and so on), and sandwiches.

More walking, which made for a good occasion to shop for some shoes. Here’s the weird thing: While the entire country travels from the Netherlands to Milan for shopping, I still source the majority of my clothing in the Netherlands (and Germany). It just so happens to be more my style, and that is certainly true for shoes. Not even that I’m a big fan of this super typical Dutch shoe type (exaggerated in length at the front), and yet. Well, eventually, I bought from a Belgian brand.

Probably the most entertaining one I’ve ever been to. My office mate has always impressed us with her massive and deep reservoir of energy. At her defense, she couldn’t hold it and got so overwhelmed by herself that she started to cry before she even started to defend. Now, that might call for empathy, but in this case, empathy expressed itself in feeling charmed by so much weight, and laughing it off together with her. This was the red line that told the defense’s story.

It was also the first time, that one of RSM’s associate professors served on a PhD defense committee. He had just recently received tenure. He asked me afterwards if his question had been too harsh. I thought it had been very fair and interesting. In fact, all the questions were interesting, and not just some ceremonial duty to pass by.

And obviously, the defense process of a Dutch PhD defense is by itself a worthy experience. Here’s roughly how it goes: At the very beginning, the PhD and his two paranimfs are led in by the pedel, a ceremonially dressed person with a stick. The pedel then also leads the committee, which consists of as many as seven professors and a representative of the board of the university. This representative opens the defense, which starts with a 15min introduction into the topic. That one is actually meant to inform the audience, not the committee. Afterwards, the committee brings its questions forward to the candidate, who has to respond with a formulaic address. Questions may take exactly 45min, which the peddle controls. The committee leaves to discuss the defense, and returns with its verdict, at the end of which the certificate and some gifts are handed over. All that gains in character by the traditional clothing of professors as it has been customary already in renaissance times, with colors indicating school and university that each member of the committee comes from. Oh, and the paranimfs… they are theoretically allowed to answer on behalf of the PhD candidate, but usually just sit or stand silent next to the defending PhD. Their origin lies in a time when defense could have been so heated that physical support might have been necessary. Now, they are essentially like the best man or best woman at a wedding, organizing reception and gifts from friends. 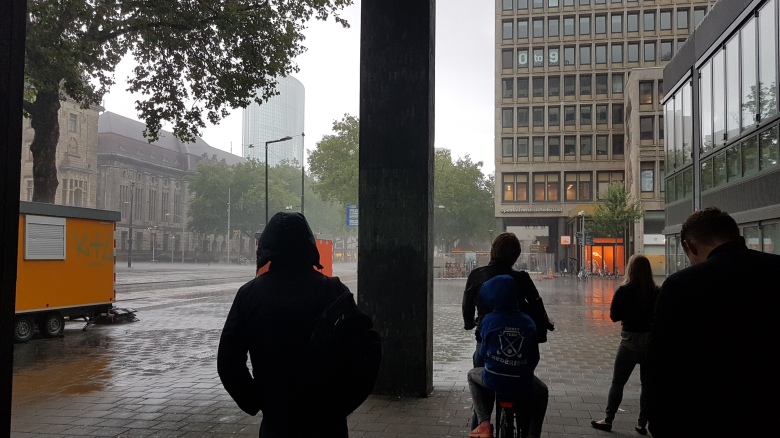 Told you: It's a trilogy. Today's timberframe monument is the "Riese" hotel in Miltenberg, one of Germany's oldest inns. That brings an end to this first big cycling weekend of the year.
Guess we might make this a series. Yet another romantic spot in the middle of Germany. Yet another chance to claim the photo of the day. 😜 Prettiest city hall in Germany?
Cyclists of Germany, I'm sorry, but I took the picture of the day. 😁😁 Find this romantic spot in Rothenburg ob der Tauber.
Rare moment that @anyuchenay takes a photo of me. We're often so in the flow of moving. This Saturday, we reached the peak of our winter - almost literally. My legs long for cycling, but I'm grateful for every weekend in the snow.
Where is home? Every place you crave to return to.
Throwback to just one week ago, when I said goodbye to short-sleeve jerseys for this year.
Weekend is near. Time to go to high altitude again.
The Tremola San Gottardo might slow me down, but accelerates my love for riding the Alps.
I don't know if you can tell who is the mountainbiker-slash-splitboarder among us. @guido_anderwert knows all these mountains covered in snow. I took him in my world of tarmac for one day. @lars.waser showed that a Madone can very well ride through the Alps - if you have the legs. And I... I had ice cream. What else?
Follow Onabike.cc on WordPress.com