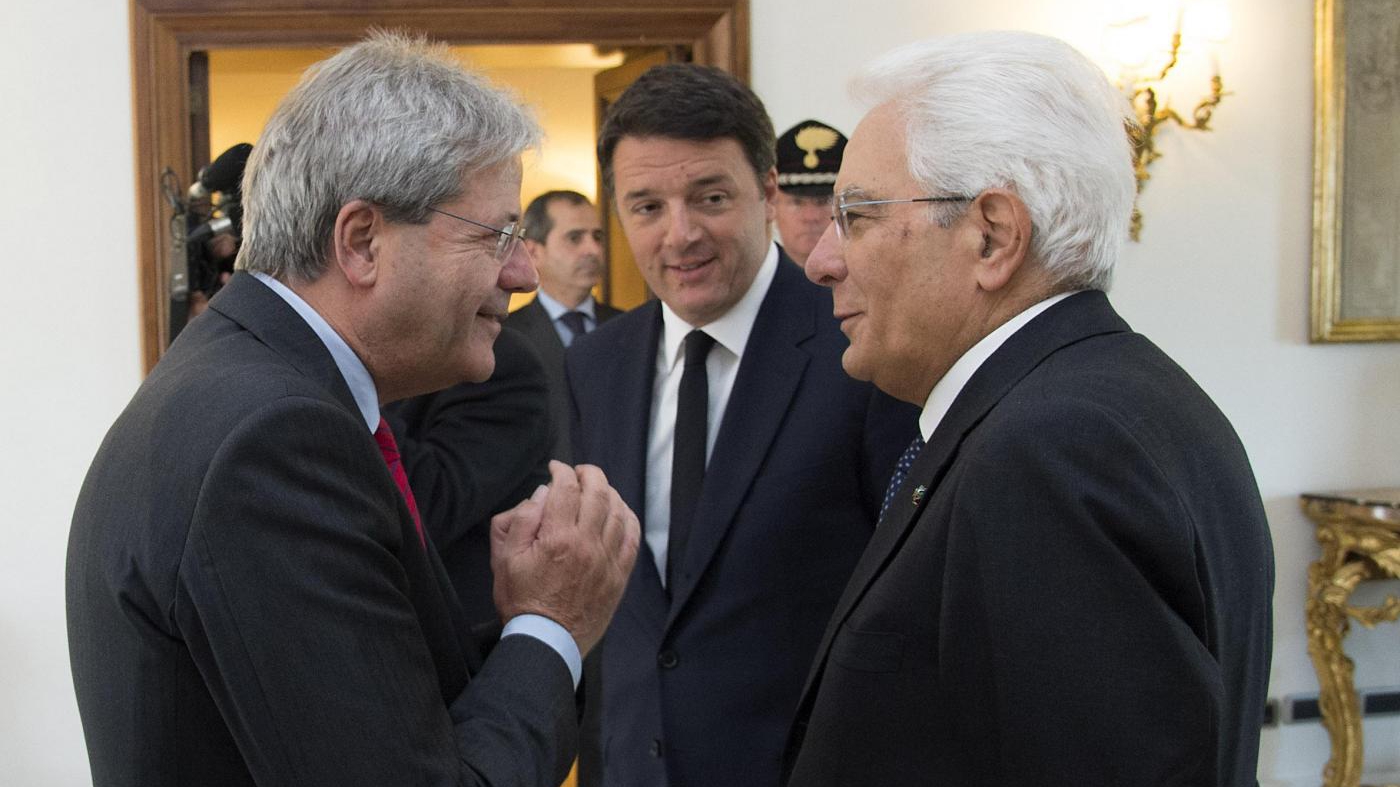 In which the girl and I try to figure out what to vote for in Italy. Just, I can't vote here.

Elections are coming up in Germany, so it’s also time for the Wahl-o-mat and similar quizzes to play around and confirm or disconfirm party preferences. In my case, it’s one more year in which my results basically confirm the decision I had already made myself. I would have had highest agreement with two small fringe parties, which I could easily exclude after figuring out some of their detailed stances: One opposed abortion, the other one wanted followed a weird spiritual approach to politics.

On a side note: The Wahl-o-mat is around for a long time and it has an effect on turnout and voting preferences. I’m wondering if some parties have realized this and started to optimize their answers to the Wahl-o-mat survey in a way that they would maximize a positive effect on their election outcome.

Anyways, I told the girl, and she was interested to do something similar for Italy. After all, elections are coming up here as well. I found a tool with a rather American flair to the questions – question number 1, for instance, was asking for support or disagreement with the idea to assassinate terrorists in foreign country, something that the Italian constitution just surely would not allow for.

Again, my results did not really surprise me. Italy’s political landscape is dominated by right-wing parties. There is no major liberal force (after Grillo’s Cinque Stelle decided to pursue right-wing populism, only a small fringe party remained which accounts for less than 1% of the overall vote), while the social democrats (Partito Democratico) are rather right-wing when it comes to police, security, and intervention, but rather classic left-wing when it comes to social issues, and then very ambiguous in anything regarding economic affairs. Still, it’s the most consensual choice for anyone without a clear right-wing profile.

Here is how Diana and I fared, with Diana being on the left and me being on the right. Which is a rather fitting arrangement, given that her highest preference is decisively more left than mine. (Sinistra Ecologia Libertà is a spin-off from the PD, founded earlier this year by some members who opposed Matteo Renzi’s new run for prime minister, and on a fast track to become just yet another meaningless fringe party.) 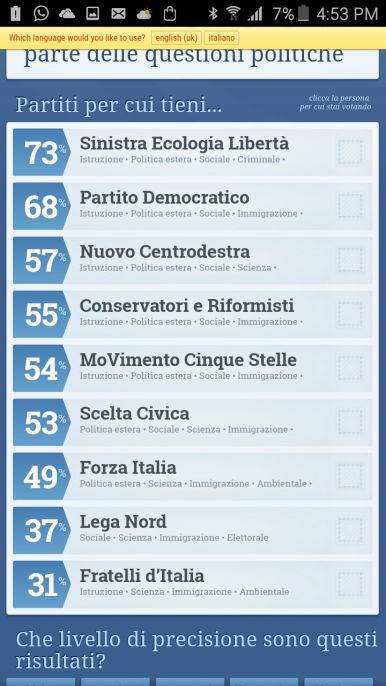 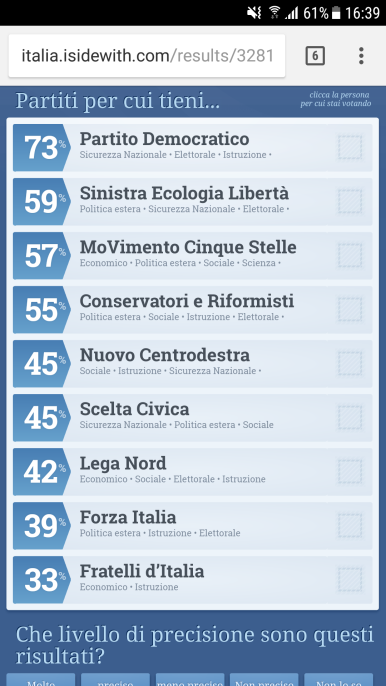 Still, more than 50% agreement with Cinque Stelle, which both of us oppose much stronger than Forza Italia? Well, Cinque Stelle does have a progressive position on some educational positions and on matters of equality. Easy for us to score agreement with them on these matters. As being the first non-left party who took these positions mainstream, no wonder they found strong support so early, but then again: they moved right-side-ways from there in many other matters.

So, yes, I would vote for PD indeed. Just, I’m not happy about Renzi being their candidate for prime minister. I much prefer the more quiet, hands-down style of Gentiloni over Renzi’s screaming, offensive fighting. Since Gentiloni accidentally had to take over after Renzi lost the referendum on Italy’s constitutional reform (which in fact was considered to be a vote also on Renzi’s political agenda – read: style – more than a vote on the reform itself), all economic indicators are finally showing an acceleration of economic recovery. So, I’d rather see Gentiloni have more time in office and Renzi lead the PD group in the parliament instead.

And the girl? Well, both her and I were a bit surprised about her strong left-leaning outcome. But again: this is potentially the outcome of Italy’s very right-wing dominated political landscape.