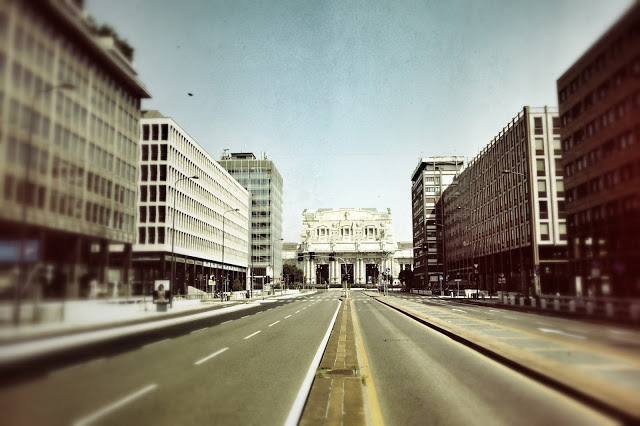 In which I describe a city that turns into a village for two weeks every year.

All things change a bit in August.

Credit for the featured photo above goes to Giuseppe Circhetta. He portrays the street that runs from Milano Centrale (the central train station – it’s the big building in the background) towards the center. During rush hour, it’s a very busy street, and else a street with normal traffic. Not the best, not the worst in Milan.

No cars. No pigeons. No humans.

The peak of which is Ferragosto, i.e. yesterday. In Italy, festivities around Holy Mary consistently seem to be more grand than those around Jesus or God. Ascension day? Not even a public holiday. Good Friday? Nope. (That’s particularly interesting for me as a German, as it is the most sacred public holiday in Germany, accounting for the fact that dance activities are forbidden by law in some parts of the country.) But Mary’s ascension? And the day that Mary conceived Jesus? Totally!

Ferragosto is August 15. By traditional perception, this is when Milan is also hottest and most unbearable. Well, it is hot today. Temperatures will go up until 32 degrees (Celsius), maybe 33. But it was much hotter already in July. It’s my third Summer in Milan and it has always been like that. July is the real Augustian hell, but August is usually just fine.

Still. In the week preceding Ferragosto, the city comes to a standstill. Supermarkets will be open, hardware stores, clothing retailers – everything that owns more than 10 branches, supposedly. Everything else: Closed. Try to find a restaurant in Milan around Ferragosto.

Allegedly, people (and pigeons) than mass-emigrate to the seaside. By common account, the dominating language there still seems to be German and/or American, sorry, English (but really: American English), so I don’t know, but I never had the impression that Germany in August would essentially be in lock-down. That just tells you how annoyingly ubiquitous German tourists can be.

Again, really: lock-down. All municipality offices are closed. All universities are closed. And I literally mean: closed. Locked. Doors shut. Impossible to enter.

Positive side effects include: It’s the time of the year that Milan can boost its average annual CO2 pollution level. You can safely cycle anywhere in Milan. You could also go anywhere with a car of any size and certain to find parking on the spot. You’ll get to take a seat in the bus even in rush hour. You can play football on the streets and try to be hired by AC Milan. You hear the mosquitoes from a meter away. You are part of an elite group that actually knows what it’s like to be in Milan over Summer.

And I honestly don’t think it would be much different if the Zombie apocalypse really had happened. Or maybe it did.

Seriously, come and visit Milan in August. Museums are open, in fact, and for the tourists, the usual restaurants are also open anyways. (The good thing about Italian tourist traps: It’s really difficult to majorly screw up Pasta Carbonara, as long as you’re outside of Germany and Holland, i.e. the cook knows not to use cream under any circumstances.) You don’t need to stay in Milan all the time. But even for the lakes, it’s fantastic, as there is much less business than for instance in May and June. And maybe you even see Zombies. Or pigeons. Or a human, somewhere.