Skip to content
For the second year in a row, I visited this huge motorbike trade show. I still don't understand how this sexy hostess thing is still around in 2017.

For the second year in a row, a close friend of mine came over to visit Europe’s largest motorbike exhibition, the EICMA in Milan. He’s in a long process of buying a motorbike. I gave him company and advice for his stroll over the exhibition. After all, I might understand a bit about motorbike technology myself. He’s been a good trainer over the past year to give me some interest in the sport. Still, I attended EICMA with the eyes of a cyclist.

This year, I observed that e-bikes took a much larger share of the fair than last time (but there was no outdoor try-out track anymore). Last year, there were maybe three booths on that topic. This year, they had a rather spacious section in one of the halls and there was a number of other vendors dispersed over the entire fair. On display was also Bianchi’s new electronic road bike. This fall, it was praised for being one of the first to build an e-bike that maintains the sportive look of a road bike (and the first to bring it to the market).

It was far from being the only one.

Said friend of mine gave me lots of explanations. He’s interested in naked bikes, i.e. sportive oriented motorbikes that leave the engine visible to the viewer. 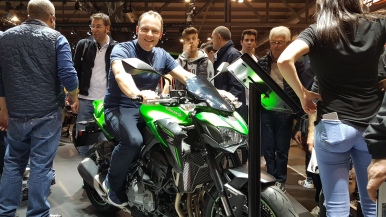 He complained a bit about the retro/hipster/lifestyle trend that apparently had had a bigger impact on this year’s new announcements. At least we observed that there was a large number of “modern cafe racers” that got much of the spotlight attention. Bikes with a sportive appeal that nonetheless are mostly made for people who just take them to the cafe around the corner. For those who’d ride fixed bikes if they were cyclists. And as with fixies, this description of a cafe racer is as far away from what the purpose of a cafe racer originally was defined to be.

But I have to say: I liked the more modern design language that some of them came along with.

No motorbike fair comes without sexy hostesses. And this is where Harvey Weinstein comes into play. All the girls in short and tight leather on their bikes, and all the boys asking them for selfies to show off to their friends at home how they had this big achievement of standing right next to a girl that’s being paid for that. It couldn’t be more obviously sexist with that. I understand that this contrast of big bad guys and sexy bad girls is part of a specific subculture within the subculture of motorcyclists. And that it has developed over decades. It’s not my thing, but I can accept that easily if it occurs within their meetings and gatherings. At EICMA, almost every company made references to this subculture.

Yet I had a breaking point during the exhibition. At some point, we walked past by a booth of some random company (forgot the name) where they had put two girls on an elevated spot. They were wearing the typical costume: hot-pants from leather, and basically just something like a leather bra. They danced tantalizingly. The guys around them where shouting and whistling like you know it from the typical movie scene in a red-light district night club.

BMW used two types of hostesses. Some were sitting on key-featured motor bikes, and some were walking around and providing advice and assistance to visitors of their exhibition space. The latter were dressed like you’d meet young girls also in the street. Leggings and a t-shirt. The former were dressed up as well, but there was no lack-and-leather. Rather, there were two guys in jeans and cardigans, and two girls in very fine and elegant cocktail dresses. That kind of dress that the girl would wear for office even. No plunging neckline, notably, and a very normal make-up. Sure, the purpose is the same, and the mechanism is not much different (it’s still attractive girls and guys). And yet it respects the dignity of their hostesses and delivers a statement for gender equality (it’s girls AND guys).

Triumph went even further. No models on any motorbike. Only supporting staff walking around. One dress code. Both guys and girls, and both hostesses and actual Triumph employees were simply wearing black trousers and a white long-sleeve shirt, sleeves rolled up to the elbow and the top button left opened. It had a nice side effect, as it made them more approachable. Any Triumph booth employee was a potential person of contact, and a potential source of information. We actually asked two hostesses a rather specific technical question. They then brought us to the right guy (or so they thought), who then walked with us to the actual right guy.

Sexy hostesses are not normal. They are ubiquitous (not only at EICMA), but they are an ubiquitous display of our own sexism. They are selected for body characteristics. They get comments. They get touched indecently. And, yes, it’s not a new thing. We’ve had these debates for many years.

But now we have #metoo. And companies talk in much detail about how they take care of their employees and assure sexism-free workplaces. So shouldn’t the time have come for the very same companies to take a stand in support of their trade show staff?

They are not helping business anyways.

The Tremola San Gottardo might slow me down, but accelerates my love for riding the Alps.
I don't know if you can tell who is the mountainbiker-slash-splitboarder among us. @guido_anderwert knows all these mountains covered in snow. I took him in my world of tarmac for one day. @lars.waser showed that a Madone can very well ride through the Alps - if you have the legs. And I... I had ice cream. What else?
The Furka is my favorite Swiss climb. First time I went alone. Second time I road with a friend. Third time we were three. A couple times more and we ride it up all together? 🤔😜
One thousand kilometers since @anyuchenay took this photo. We pass too many places that I'd love sharing. Early on Sunday, I'm taking off for adding the next set.
When the rain caught me by surprise on top of the #sanetsch, for once I was happy that the descend wasn't a road. Without jacket and gloves, I'd have been freezing. Also, it makes for a unique road bike experience to go down by lift.
A week ago, I spent a happy weekend in Südtirol with @anyuchenay, @mathimuc, and his girlfriend. Gelato was included, and some long hours on the road were a welcome rest amidst some restless days. We'll be together again.
I often talk about how gelato stops are important elements of my Italian rides. It's only logical that I "joined" @q36_5 's Team Gelato. (i.e. purchased the jersey.)
One of the longest, one of the prettiest climbs in the Alps. An iconic bit on the Italian side of the Passo dello Spluga are the few very short switchbacks that are stacked on each other. Leads to lots of epic pictures that road cyclists dream of.
Me and Fausto, a story in four episodes. Fausto's monument stands next to the church of the Madonna del Ghisallo, 580m above Lago di Como. For decades, the local priest collected bicycle memorabilia and displayed them in the church. Today, long after his death, the church at the end of this iconic climb is a destination of "pilgrimage" for cyclists. Read: have an excuse for a day out at the Lario and its awesome deep blue waters and high altitude mountains on all sides. Today, I was nearly alone, but full of happiness about finally riding like it's Summer. Well, until the sweat started to run into my eyes...
Follow Onabike.cc on WordPress.com