Skip to content
It was a miracle of a day at the lake. At the end, I felt like George Clooney.

My very first encounter with Lago di Como dates back to August 2009. I was just about to finish my graduate studies in Berlin, and I was speaker of a local group of scholarship-receivers of Germany’s Konrad-Adenauer-Foundation.* Once every two years or so, speakers could apply for a trip to the foundation’s property in Cadenabbia at Lago di Como. That property also used to be the summer home of Germany’s first chancellor, Konrad Adenauer himself. He had good taste. It’s just opposite of Bellagio and offers amazing views. But he must have liked sunrise more than sunset, as it’s on the Western side of the lake. In fact, I do remember that he was considered quite an early bird.

The Western side of the lake has long been uncharted territory for me. It has a reputation for very heavy traffic on the lake-side road. There’s also no train going up the lake, which means you have to start at the very end of the lake – either North or South. Only this Summer, I had made my first trips to the Western side. It wasn’t all that bad.

Gravity helps, wind does not

This time around, I went all the way up to Chiavenna. Still had an open project there since I had to cancel my last attempt to reach the place due to bad weather. Starting in Chiavenna, I had both the wind and 200m of altitude loss over 25km helping me reaching the lake. The ride was pure enjoyment. I followed the paved cycle path to Verceia at the Lago di Mezzola. It’s in wonderful condition, except for two kilometers at the Northern part of that small lake, where roots of trees have turned this into a rough patch of road. 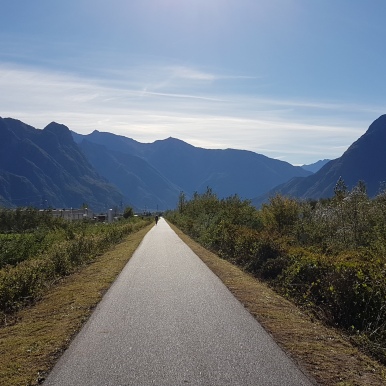 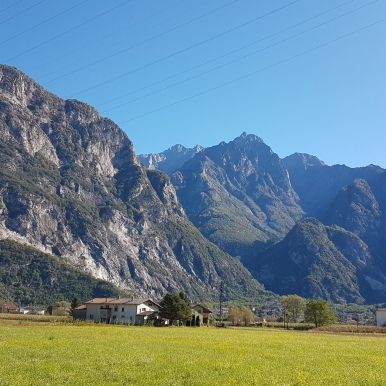 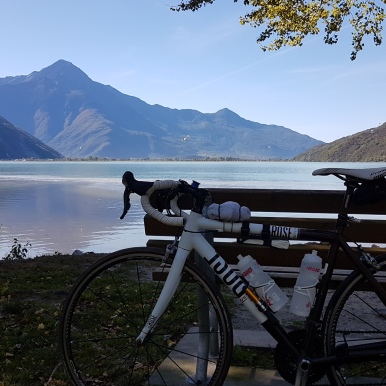 I then made a short loop to Dubino, entering the Valtellina. My aim was to cross the Adda in Dubino and access the Sentiero Valtellina, another cycle path that comes down all the way from Bormio. (It’s in great condition between Bormio and Tresenda and after Morbegno, but the rest needs renovation.) This was a wonderful experiment on the influence of wind on riding speed. Basically, I first went straight East against the wind on one side of the river (26-27km/h, pushing it as hard as I could), and then back straight West on the other side (35-36km/h, riding normally). The take-away: in these valleys, you can benefit of taking into account wind direction, which in this area more often than not changes to the opposite direction half-way through the day.

Finally I reached the lake. The traffic that I initially encountered on the first three, four kilometers worried me a bit, but without any major junction it disappeared. From then onward, it was as enjoyable a ride as any other time it had been on the Eastern lake side. The views were spectacular on that Saturday. Clear, no clouds, and highly saturated colors. No sign of early October other than some falling leaves.

Down the lake, I basically followed the main road. Some alternatives exist here and there. Around Gravedona, I could get a bit closer to the lake. For 2km only. A bit later, I could actually get a bit higher using some steep slopes built for agricultural traffic. Around Menaggio, I could again get on a more elevated level. In both cases, views would be rather much obstructed by trees, however. The main road instead is in good condition – better than on the East side, in fact.

Occasionally, the road splits into a more local route through the villages and a higher-order route to Como. Always take the more local route. I didn’t find too much traffic South of Gravedona anyways, yet it was always less on lower-order option. Also, villages offer opportunities to refill water bottles, and usually grant better lake views. 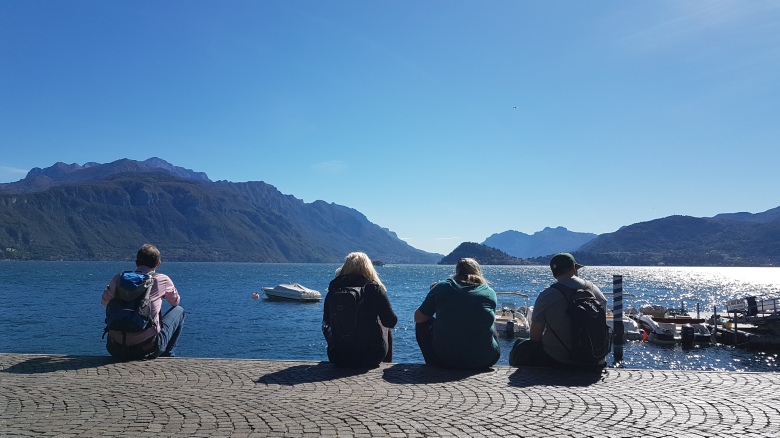 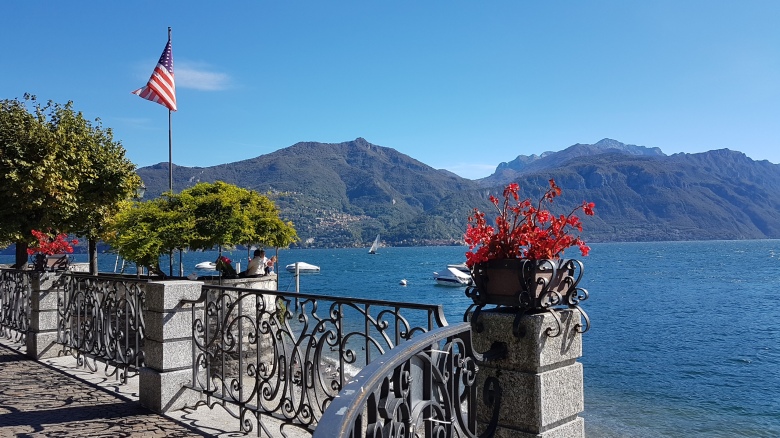 Some longer tunnels appear between Gravedona and Menaggio. None of them is mandatory for cyclists. All of them have a cycle path with asphalt surface that bypasses them. These are amazing, carry no traffic whatsoever and grant unchallenged lake views. Towards the end of the third bypass, just North of Menaggio, I passed the most beautiful real estate property that I have seen anywhere at the lake. I recognized it the moment that I was able to spot the garden: it was the villa in which James Bond killed Mr. White after he lost Vesper to him in Venice (Casino Royale). Apparently, an apartment in this villa is up for sale since 2015. I guess we know what this implies about the price.

My only issue with these tunnels is that they are a bit tricky to enter and exit when going in Southern direction. Notably the second tunnel starts right after a right-bending turn, and crossing over to the cycle path appears in the hidden. Even worse, the second and third tunnel are just 100m apart from each other, and there’s a ever-so-slight turn as well. I advise to slowly roll on the wrong side of the road, paying attention to upcoming traffic. It seems safer to me as compared with crossing the road twice in a turn right in front of a tunnel portal.

In reality, we need to remind that no place is safe. On an open and straight bit of road between Menaggio and Argegno, I was just going ahead on the right hand side of my lane. Three cars came from the opposite direction. The third jumped out from behind and tried to overpass the other two when they were just 150m away, completely ignoring my existence. I didn’t gamble. Within three seconds, I stopped, went on the street’s tiny shoulder and leaned against the rocks on my right side. To the driver, who went back on his side of the road 25m before the place where I stood, I generously extended both my middle fingers. It was an unwelcome moment. Ironically, it reminded me of another very similar incident that I also had experienced at Lago di Como, just a few kilometers away on the other lake side. Same setup, just that this time I had not been caught in disbelief and had reacted earlier.

In Cadenabbia, I left the main road for a tiny bit. It served a purpose. Passing the Western side of Lago di Como, I could not ignore Villa La Collina. Obviously, I couldn’t enter. I could still take a photo at the entrance, send it to my peers from those days as a scholar, and kind of close a big circle. A few kilometers later, I closed another circle with a short loop up the mountains. From Argegno, I went up into the Valle d’Intelvi. It’s a beautiful and not very challenging climb on the Western side that has two parallel ascents, starting just 2km apart from each other. However, going up here is a waste of beautiful scenery, because the stunning like will mostly be in one’s back. Going down is where this one really adds pleasure. Last time, I had only gone up and continued on other ways. This time, I gave myself a sweet lake arrival.

Eventually, I reached Como, which was buzzing of the normal number of tourists and an additional crowd of cyclists that had come to spectate the finale of Il Lombardia. I was one of them. I had enough time to relax for a moment, get some ice cream from a more silent spot in the city center, and get on the lower slopes of a climb that the professionals would do at the beginning of their final loop around Como. There I awaited them, and after they passed, I returned to the center and got a spot at the finish line to see them again. Same as what I did two years ago, when the race also ended in Como. Vincenzo Nibali won. Just like two years ago as well.

A lady from Italy and a small group from Denmark definitely had a big share in the greatness of the day. I was wearing my bike jersey in traditional Bavarian/Austrian Trachten style. I know it’s an eye catcher, especially in Northern Italy and Switzerland. (Not so much in Bavaria and Austria.) In Como, many people turned their heads, or just smiled. In Menaggio, this Italian lady saw me while I took a photo and then candidly asked me if it was okay for me if she took a photo of me. She loved it. We briefly exchanged a few words and I gave her the name of the shop. I bought mine from mtb-trachten.com. Sorry for the quality of the next photo. It’s the only one I have in which you get a glimpse of the trousers as well.

Later, in Como, the three Danish people asked me for a photo as well. I’m not going to lie: I felt a bit like the coolest guy in Como on that afternoon. Basically filling the gap that George Clooney left when he sold his house higher up the lake a few months ago. 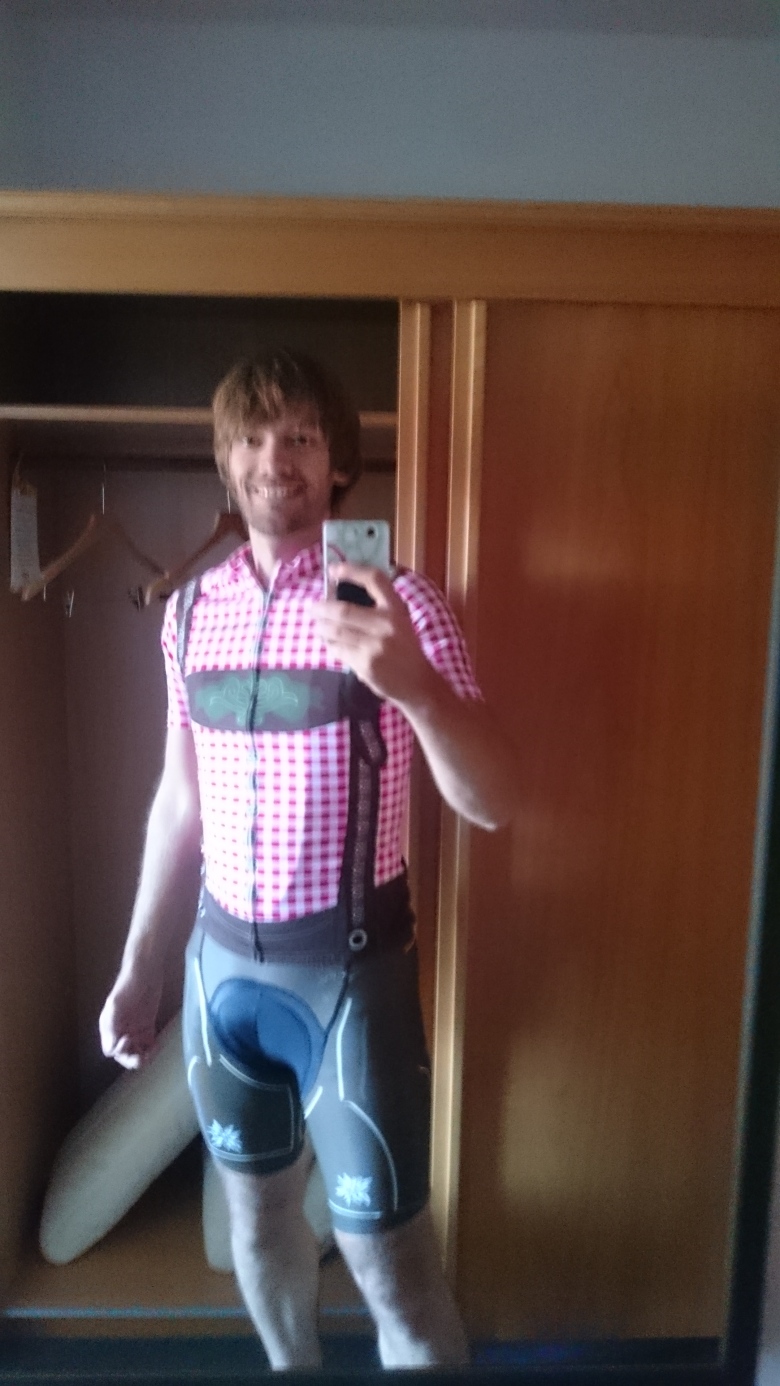 * Student stipends are organized a bit particular in Germany. Each major political party, each major state-recognized religion, and a few other major organisations administer the stipends and recruit the receivers. Stipends can replace the open welfare program of the state. Both stipends and this welfare program are income dependent, but stipends do not have to paid back after the end of studies, and they are enlarged with an income-independent lump sum for books. When I was a student, that lump sum was 80,- EUR for each semester, and it was later increased to 300,- EUR. You won’t get rich. The actual value of these scholarships lies in the knowledge-based support (i.e. the possibility and obligation to participate to various workshops and seminars), in the certified recognition of talent, and in the network.