Skip to content
I've tried Milan's new Mobike system for the first time. I'm impressed, but not in a good way: It's a kids bike.

A few weeks ago, I talked about the looming advent of Mobike, one of those Chinese free-floating bike sharing operators. They are now here. And I’ve tried it out. I’m visually attracted, but functionally disappointed.

Let me start with the good stuff: The bikes are certainly sturdy. I don’t see much reason to expect heavy damages from conventional use. That said – it goes beyond my understanding how some of the BikeMi bikes could get to the state in which they are. We’ll see what the future holds. I also liked the process: Reserving a bike, unlocking it, and locking it again seem almost painfully easy. Only do I find the GPS accuracy of the indicated bike locations to be a bit weak, and the app sometimes gets a bit stuck. There was also a social element: when I was pedaling home yesterday, my eyes crossed with that of a lady who had just started her ride, and we greeted friendly.

That’s all fine. But as soon as you start pedaling, you notice what is wrong with this bike.

The Mobike has only one gear. That’s okay by me. It increases durability. Gears on the BikeMi bikes are almost always not working as they should. But Milan is a flat city. It seems wise to me to pick a gear with which you can comfortably go with around 15-20km/h – a typical relaxed commuter speed. Instead, the default gear ratio is that of a climbers bike, and 15km/h is pretty much the maximum speed at high cadence, while the regular speed is likely just twice walking speed. That’s an odd choice.

Even worse is the saddle, or more precisely: the possible range of saddle height adjustments. At 172.5cm (5.6ft), I’m not exactly tall. Not even for Chinese standards. Yet, I can’t get the saddle high enough for me. As a consequence, pedaling feels terribly uncomfortable. And more difficult than it should, certainly at that gear ratio.

Which leads me to conclude: It’s a kids bike, not a decent commuter bike. Unfortunately, I’m afraid this will severely limit adoption rates beyond the initial tryout. It’s a lost chance. I’m just surprised not to find any similar comments on this online. It installs some hope in me that this might not be the international standard, and could change in the future. 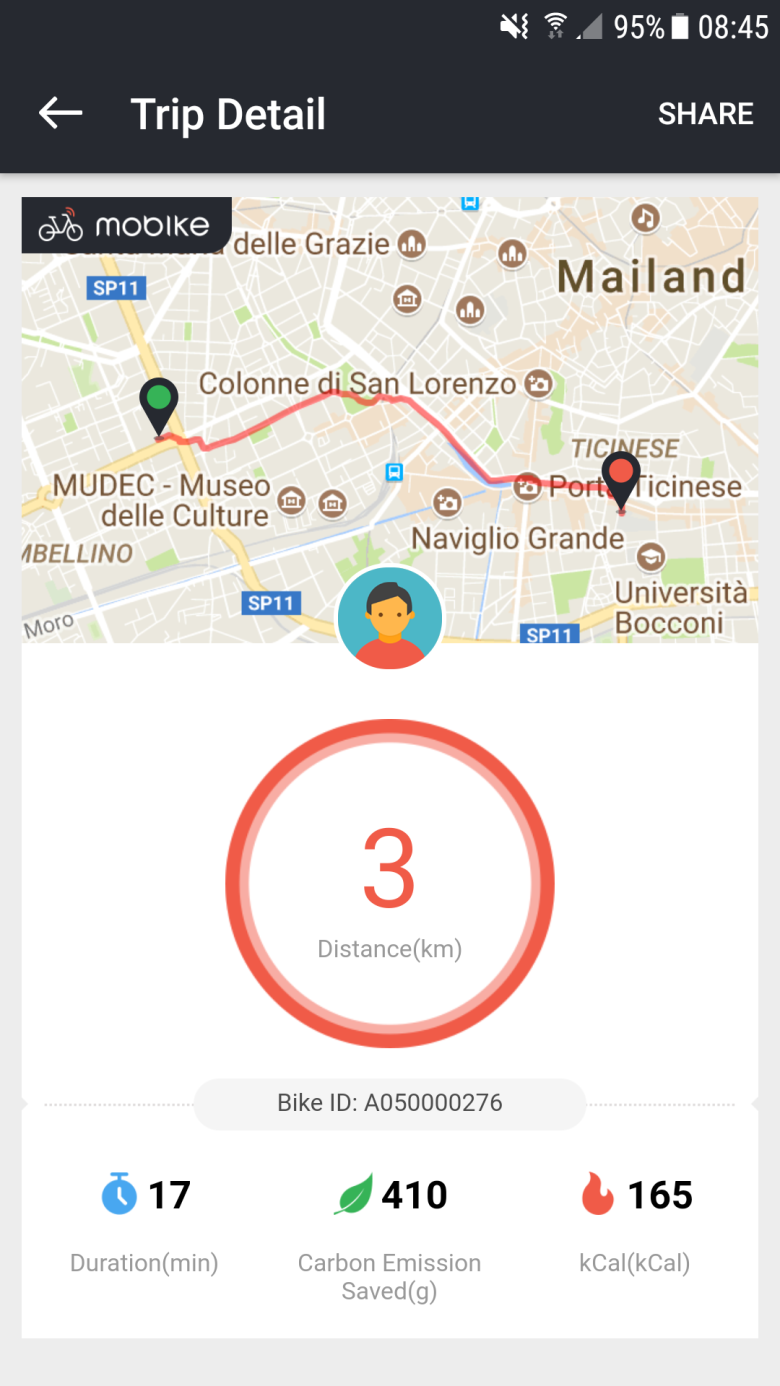 It took me 17 minutes to get from home to Bocconi, door-to-door, because I was lucky and could use a bike that was parked right in front of the house. That’s 3.5km (measured with GPSies.com), i.e. an average speed of just 12.3km/h. It was rush hour. By car, it would have taken me 30 minutes, and maybe 25 minutes by public transport. So I was still much faster. But back in 2015, when I was riding the BikeMi system, I would usually make it in 12 minutes. Well, in 17 minutes as well, as I first needed to get to the closest station and then walk to my destination from the closest station on the other end of the ride. Nonetheless, the actual ride time on a BikeMi bike is about 33% faster than on a Mobike.